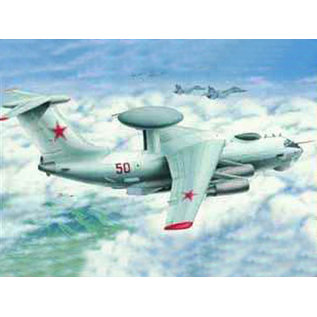 The A-50 is a early warning and air-controlling aircraft derived from the IIyushin-76(Nato codename as Candid). The western nickname for the plane is Mainstay. The purpose for developing the A-50, was to target against the USAF E-3 surveillance plane which monitor the enemy’s air operations, transmitting information to interceptor aircrafts and controlling their air operations. The software for the early warning system and modifications to the fuselage were developed in 1970. It took many years before they were completed and commenced production from 1984. This early warning plane was named as A-50 only without any design bereau name mentioned unlike other former Soviet aircrafts. For A-50,the IIyushin-76 transport fuselage was extended longer with the aircraft nose modified. On the upper front fuselage, air-fueling capabilities are installed. The main wings, engines, vertical tail remains unchanged except on the upper part of the fuselage. A 9m round aerial radar dish was added with a search range of up to 300-400 kilometers. Even small air targets like cruise missiles can be easily detected. The data detected on front part of the fuselage. Since 1984, about 25 A-50s are produced with service in the Russian Air Force. Most of them are deployed along the Scandinavian borders and the Kamchatka Peninsula.