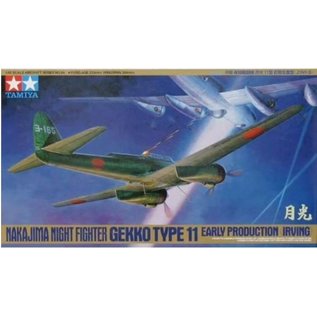 The Nakajima Gekko Model 11 (Allied reporting name "Irving") was adopted as a nightfighter by the Japanese Navy to combat American bomber raids during WWII. This kit depicts the early-production variant, which featured a characteristic hump on the upper section of its fuselage. The four 20mm cannons, two upward- and two downward-firing, have also been reproduced together with their gun mounts and magazines. The inspection hatch may be assembled in either open or closed position for increased display possibilities. Two crew figures and five marking options are also included.