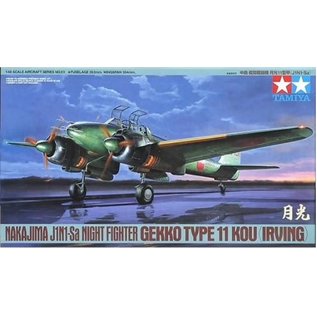 Originally designed as a long-range fighter, the three-seat twin-engine Nakajima J1N1 was designated as a reconnaissance aircraft after failing testing. Following being successfully used as a night fighter against US bombers, official production began in 1943 on a night fighter version, the J1N1-S Gekko (moonlight). Modifications included removing third seat, adding twin-mounted 20mm guns behind cockpit canopy angled up at 30 degrees and underneath fuselage angled down at 30 degrees. The Gekko proved successful against B-17 and B-24 bombers, and continued to fight until the end of WWII. The later version, the J1N1-Sa, featured singular exhaust stacks and three 20mm cannons mounted in upper fuselage with lower guns removed. Some later Gekko models also featured an antenna and radar system mounted on the nose.