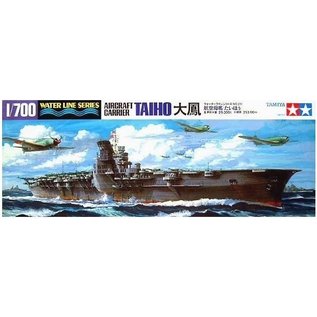 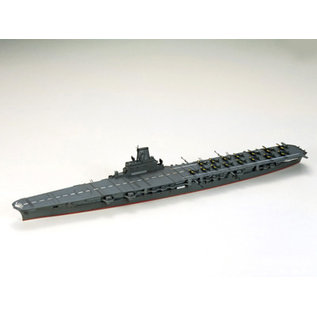 This is an assembly kit of the Taiho, an aircraft carrier which was completed in March 1944, near the end of WWII. Built with a new design philosophy, she was expected to be a mainstay of Japan's Mobile Fleet, but was sunk by submarine attack just 3 months into her service life. Distinctive features of the ship such as the armored flight deck and enclosed bow have been accurately reproduced. The bridge and anti-aircraft armament are also sharply rendered. Modellers can choose to depict the ship's mast in either cruising or battle stations position and the elevators can be assembled in either up or down position as well. Kit includes parts to depict Mitsubishi A6M5 fighters and Nakajima B6N torpedo bombers.