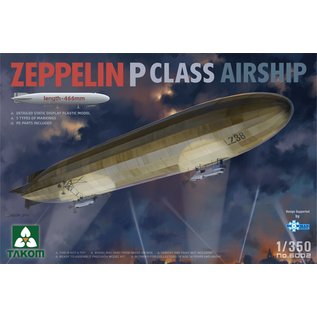 The Zeppelin P Class airship was the first type to be put into production after the outbreak of WWI. A total of 22 P Class types were built (as well as 12 of the lengthened Q Class type). P and Q Class Zeppelins were operated by both the German Army and Navy. They were deployed on the southern and eastern fronts, as well as naval patrol work over the Baltic and North Seas and were used for many of the airship bombing raids on the United Kingdom during 1915-16. The class was obsolete by 1917 and most of the craft that had not been lost to accidents or enemy action had been dismantled by the end of September 1917.

The P Class was an enlarged version of the preceding M class. On 5 August 1914 the Zeppelin company proposed a design based on the LZ 26 to the German Navy Ministry. This had been originally planned as a passenger carrying craft for DELAG and was the first Zeppelin with a duralumin framework which had the strengthening keel inside the hull structure. The proposed design was larger, and a fourth 210 hp 160 kW Maybach CX six-cylinder engine was added, allowing a greater range and payload. Later examples were fitted with four 240 hp 180 kW Maybach HSLu engines. The P Class also introduced enclosed crew accommodation, as the gondolas of the previous M class Zeppelins were open.

Faced by increasingly effective defensive measures, Zeppelin introduced the Q Class in late 1915. Internal volume was inflated by lengthening the hull by 49 ft (15 meters), increasing its operating ceiling by about 1,500 ft (460 meters). Many of the existing P Class airships were similarly lengthened.