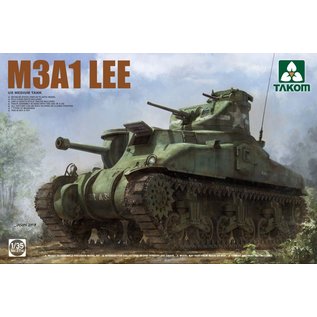 The outbreak of WWII in Europe caused the U.S. Army to recognize it was lacking an effective tank force. Design of the Medium tank M3 commenced in July 1940, with production beginning in December, and the first units becoming operational in late 1941. The U.S. Army required a tank armed with a 75mm main gun and the United Kingdom had made an immediate demand for more medium tanks. The main design archaically mounted the 75mm main gun in the right sponson, with another 37mm gun mounted in a small turret on top, which was a compromise meant to produce a tank as soon as possible until the M4 became available. In Great Britain the tank was called by two names based on the turret configuration and crew size. Tanks fitted with the U.S. style turret were called the “Lee”, named after Confederate General Robert E. Lee. Variants using British style turrets were known as the “Grant”, named after Union General Ulysses S. Grant. The M3 offered potent firepower and sturdy armor, but had serious shortcomings in it’s design and shape, including a high silhouette, and the sponson mounting the 75mm main gun, which limited the traverse and prevented the tank from taking a hull-down position. 300 tanks were produced with a large cast hull, and mainly used in the U.S.A. for training purposes. Multiple variants and derivatives were spawned from M3 production, including the M31 armored recovery vehicle, the M7 Priest self-propelled gun, the CDL (Canal Defense Light), and the Canadian RAM cruiser tank.