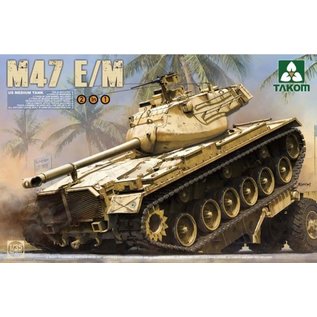 In the early 1950’s, the U.S.A. found itself committed to defending the newly formed cold war NATO alliance in Europe against the Warsaw Pact forces, and fighting a hot war in Korea, resulting in a severe shortage of tanks. At the time, the best US tank in service was the M46 Patton, but because of a lack of stocks of M26 Pershings available for the conversion, it was decided to produce an interim design utilizing new concepts from the experimental T42 medium tank, which had been experiencing developmental problems.

Based on a modified hull of the proven M46, the 48.6 ton M47 featured the cast T42 turret with its improved ballistic protection. The turret ring diameter on the hull was increased to fit the T42 turret, housing the M36 90mm main gun with M12 optical stereoscopic rangefinder protruding from the upper corners. A secondary Browning M1919 .30 caliber machine gun was mounted coaxially to the main gun, and another in the bow position of the hull (the last time this was featured in a U.S. tank design), with a Browning M2 .50 caliber machine gun mounted in a pintle on the turret roof. 71 rounds of 90mm ammunition were stored inside the vehicle, with 11 mounted in the ready rack in the turret bustle, 12 on the sides of the hull, and 48 stowed in racks beneath the turret floor. The upper glacis was improved by increasing the slope of the 4-inch (102mm) armor to 60 degrees, and the rotoclone blower was removed from the upper front hull, replaced by a new blower above the turret bustle. The configuration of the hull was further modified from the original by removing the 2nd & 4th track return rollers on each side. Powered in the rear by an improved 800HP Continental AV-1790-5B V-12 air-cooled gasoline engine and Allison/General Motors CD-850-4 transmission, the M47 had a maximum speed of 37 mph (60 km/h) and an operational range of up to 100 miles (160 km). The M47 was the last US tank to require a 5-man crew, which consisted of the driver & co-driver/bow machine gunner stationed in the front of the hull, and the tank commander, gunner, and loader in the turret.

Production for the Ordnance Department began in June 1951 at the Detroit Arsenal, later being taken over by Chrysler, and concluded in November 1953, with some 5481 units produced, with an additional 3095 examples being produced by the American Locomotive Company (ALCO). By the late 1950’s, the M47 was already declared obsolete in favor of the new M48, and was retired from US service without firing a shot in combat. Nevertheless, the M47 was exported through the Military Aid Program to Austria, Belgium, Ethiopia, France, Greece, Iran, Italy, Jordan, the Republic of Korea, the Netherlands, Pakistan, Portugal, Saudi Arabia, Somalia (from Saudi Arabia), Spain, Sudan (from Saudi Arabia), Turkey, West Germany, and Yugoslavia (later Croatia). The M47 has seen combat in the service of Croatia, Ethiopia, France, Iran, Jordan, Pakistan, Somalia, and Turkey.

In the late 1960’s, an upgrade program was implemented by Bowen-McLaughlin-York, Inc. (BMY) to bring the fleet of M47’s up to the latest combat standards of the M60A1, ultimately setting up facilities in Iran and Spain to carry out the conversion in the 1970’s. The co-driver/bow machine gunner was

removed from the equation, allowing the bow machine gun to be removed & the aperture sealed with an armor plug, providing space for extra ammunition and a new crew heater. The track tensioning wheel was removed, and compensated by repositioning the rear road-wheels 3.8” to the rear. The Continental's AVDS-1790-2A supercharged diesel engine was installed in combination with the CD850-6A transmission, requiring the upper and rear engine covers from the M60A1 to be grafted onto the rear hull. Further changes were made with the adaptation of fenders & sponsons from the M48A5, including top loading air cleaners. In Iran, the conversion was carried out on all 400 Iranian & 147 Pakistani M47’s, resulting in the M47M (Modernized). In Spain, the modernized tank was first known as the M47E (España), until upgraded to the M47E1 with rearranged ammo stowage & crew heater. All of Spain’s 389 tanks received the initial upgrades, but 45 tanks were further upgraded with night vision and a new Rh-105 105mm gun & improved Fire Control System, and designated the M47E2.