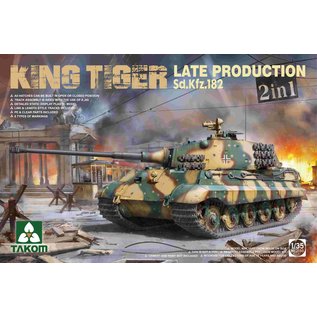 The German Tiger Ausf. B, or King Tiger was arguably the very best tank that was put onto the battlefield during WWII, as well as the costliest. With each unit requiring some 300,000 skilled man-hours to complete, the King Tiger went into serial production in December 1943 at the Henschel factory in Kassel. At the peak of production, it took only 14 days to complete, and by the end of the war 492 examples were ultimately produced of the 1500 units ordered due to the intense Allied bombing campaign.

With frontal armor reaching up to 150mm thick and side armor 80mm thick, this nearly 70 ton tank was built around the famous dual-purpose semi-automatic 88mm canon firing armor-piercing or high explosive rounds, the KwK 43 (L71) produced by Krupp, with the T.Z.F.9b/1 binocular gun sight (later followed by the monocular T.Z.F.9d) built into the cradle. This set-up allowed the tank to engage virtually any enemy tank before it could come within firing range. The King Tiger with Porsche turret carried a maximum combat load of 80 rounds of ammunition, while the Henschel production version carried 86 rounds. Additional armament came in the form of 3 Rheinmetall Machinengewehr 34's with 5800 rounds; one mounted in a kugelblende on the right bow position; one mounted coaxially to the main gun; one mounted externally to the commander's cupola.

This massive tank was mobilized by a OLVAR EG40 12 16B mechanical transmission with 8 forward and 4 reverse gears powered by a 690hp Maybach HL230 P30 gasoline engine, with a top speed of 25.8 mph (41.5 km/h). The crew of 5 consisted of the tank commander, the loader, the gunner, the driver, and the radio operator. The final production version in March 1945 featured the turret completed by Wegmann, and incorporated several changes, such as the fitting of ‘D’ loops on the turret for attaching foliage camouflage, the removal of the AA ring mount from the TC’s cupola, the simplification of the rear hatch, the introduction of 18-tooth drive sprockets, the omission of the jack & jack block, and the replacement the grills on the engine deck with louvers. A proposed July 1945 production upgrade was to include a new Entfernungsmesser 1.6 m R (PZ) rangefinder (which was designed exclusively for the new modified turret of the King Tiger), a new radiator system, a new 3-piece engine access hatch, FG 1250 infrared system,  replacement of the coaxial MG34 with the MG42 in a new mount, and in some the replacement of the MG34 mounted in the kugelblende with the Sturmgewehr 44.

The King Tiger dominated the battlefield in terms of capabilities, but often suffered from shortages of lubricants & fuels. These tanks proved themselves in battles ranging from Normandy, the Ardennes, Lake Balaton, and Berlin. Although they lived up to the expectations of the 'Wunderwaffe', the King Tigers were ineffective in stopping the overwhelming numbers of opponents they faced on the battlefield. Today there are a total of 11 King Tigers preserved around the world, with the rest having been long lost to the scrap yards.