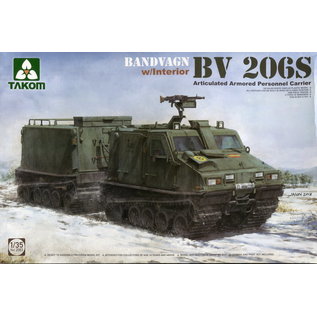 The Bv206 S armored personnel carrier version of the tracked articulated all-terrain vehicle was developed jointly by Hagglunds and the Swedish Army, initially for use by the Swedish armed forces. It is in service with the armed forces of France, Germany, Spain, Italy and Sweden.

Powered by a 6-cylinder Steyr M1 ‘Monoblock’ diesel engine, the high mobility armored personnel carrier enjoys ballistic protection from small arms and can maneuver through uneven terrain and extreme weather conditions. The vehicle operates in temperatures from -32°C to +46°C, from Arctic to desert and jungle conditions. The Bv206 S consists of two tracked units, which are linked together with a steering unit. The front unit has seats for the driver and three passengers and the rear unit has eight seats.