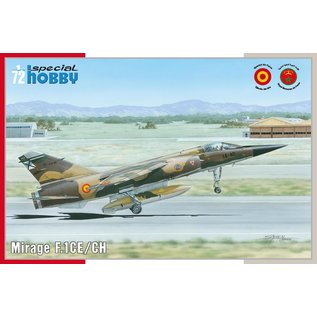 The Mirage F.1C came about as a private venture by the French Dassault company. The first flight of the Mirage F.1 took place on 23rd December 1966 and production aircraft entered service with the Armée de l´Air as the F.1C single-seater fighter  and F.1B two-seater trainer versions. During their service with France a number of these aircraft were upgraded by fitting of IFR probes which resulted in the designation F-1C-200. The Armée de l´Air also flew dedicated reconnaissance and a ground-attack versions of the MirageF.1 designated respectively as the F.1CR and CT, the latter being converted from the earlier F.1-200 airframes. A total of 246 Mirage F.1`s of all versions served with the French and the Mirage was also exported  successfully further afield. In Europe, Spanish and Greek militaries operated the type, in South America Mirage F.1`s were ordered by Ecuador (F.1JA and JE two seaters) for the Fuerza Aerea Ecuatoriana while in Africa and Asia the Mirage F.1 proved especially popular, serving with the air forces of Gabon, South Africa, Morocco, Libya, Iran, Iraq, Jordan, Qatar and Kuwait. Flying with these air forces this variant of the famous Mirage family saw combat action the world, including mock dogfights over the Aegean between Greek F.1`s and Turkish fighters,  French aircraft saw action over Chad, Libya, Afghanistan, Mali, Ivory Coast and even stood up against Iraqi Mirage F.1`s during the 1st Gulf War, Ecuadorian F.1`s were used in cross border skirmishes with Peru and South African Mirages also saw extensive action as a ground attack aircraft and fighter during the long Border War with Angola and Mozambique, often coming up against Cuban flown Soviet Mig 17, 21 and 23 jet fighters. Libyan F.1`s alo saw brief action during the Civil War of 2011 when several of them defecting to Malta.
This model offers three Spanish Mirage F.1CEs and two Morrocan Mirage F.1CHs