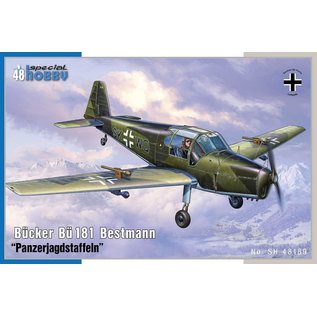 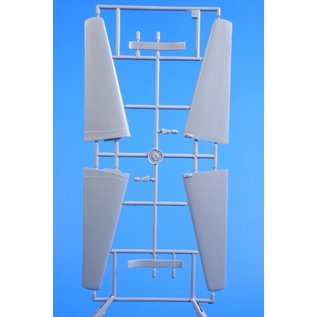 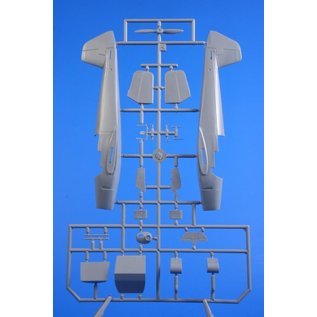 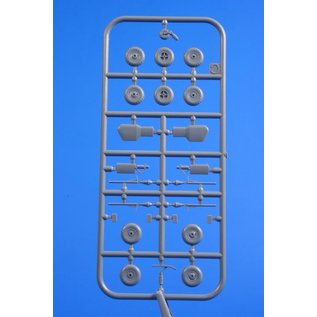 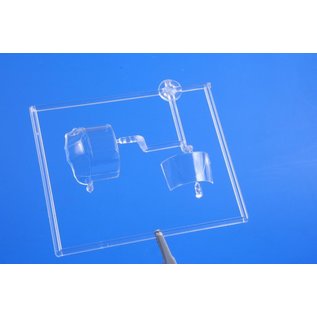 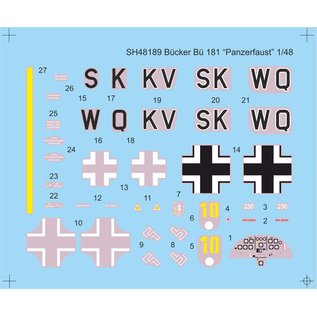 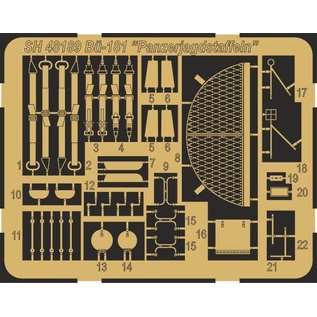 The Bücker Bü 181 was of similar design and construction to its predecessors, the famous and successful German sporting and training aircraft the Bucker Bu 131 and 133 but the new type was a monoplane with an enclosed cockpit canopy protecting the crew of two who sat side by side. The low mounted wing was of wooden construction with plywood and fabric skinning while the fuselage mid section consisted of tubular steel framework covered with fabric and the rear fuselage was a wooden shell.

The flying qualities of the new machine were found to be excellent and, following thorough flight testing by the German Ministry of Aviation it was introduced into service with the Luftwaffe as their standard training aircraft with official name `Bestmann'. Production commenced in 1940 and there were two main versions, the B and C which differed due to their powerplant being either a Hirth HM 500 A or B. The need for training aircraft grew as the war progressed so the type was not only produced by the parent Bücker company in Rangsdorf, but Fokker in the Netherlands and Zlin in the then Protectorate of Bohemia and Moravia also set up production lines too. After the end of the war, the Bucker Bestmann continued to be produced in liberated Czechoslovakia for the military and also civil aviation markets, with several different powerplants installed. During the war, licence production of the Bestmann was also carried out in Sweden as the Sk 25 and in 1950 Egypt`s Heliopolis Aircraft Works obtained licence rights for Czechoslovak the Z-381 to produce its own version known as Gomhouria (or "Republic") powered by a Walter Minor 4-III engine.

Although it was primarily a trainer the Bü 181 Bestmann was also used for light liaison duties but towards the end of the war as things proved more desperate for the Germans it was even pressed into action as a ground attack aircraft armed with either four anti-tank grenade launchers or Panzerfausts, with two mounted on each wing, or even three 50kg bombs carried in a special rack. A large number of Bestmanns were pressed into service with the British Air Forces of Occupation (BAFO) immediately after the war as light liaison aircraft and were later passed on to the French. Those machines of Swedish, Czechoslovak and Egyptian origin flew until the 1960s and some of them can be seen in the sky even today.

This reissue of the 2016 kit brings three airframes operated by the Panzerjagdstaffel unit, all of them in a standard Luftwaffe colour scheme. One of the machines has an interesting fate as it was used by a crew defecting to Switzerland at the end of the war. Three sprues of plastic parts accompany a set of resin and PE parts.