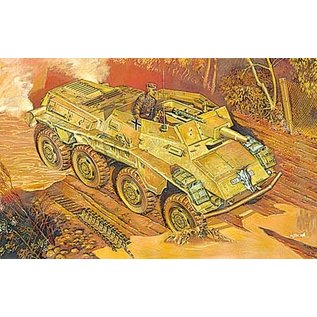 Immediately after the advanced new Sd.Kfz.234/2 Puma eight-wheeled armored car was accepted for service in 1943, an order was given to the Bussing NAG firm for the construction of a variant with a 75 mm caliber gun installation.
This machine would replace similar machines of the Sd.Kfz.233 Stummel type, which was not in series production, but adapted from GS 8-Rad machines under repair after use in combat.
The Sd.Kfz.233 Stummel had proved the concept of artillery support by armored cars, and consequently the work on developing the Sd.Kfz.234/3 began straight away.
In October the first prototype Sd.Kfz.234/3 was delivered to the range of the armored-technics concern Ariss.
The armored hull was not greatly altered in comparison with the Sd.KFZ.234/2 Puma. As with the Sd. Kfz. 233 Stummel, the superstructure and top armor plate were dismantled, but unlike the Stummel, the new armored car received the more modern K51 L/24 75mm caliber gun. Elevation was limited from -10° to +12°; and Sfl Zf 1b periscope sights were fitted.
Batch production began at the end of 1943 and continued up to the end of 1944. In total there was the opportunity to build only 88 units of the Sd.Kfz.234/3, as in 1944 the German war industry experienced widespread destruction from Allied bombing strikes, and any areas which had escaped, directed their efforts towards repairing the damage of existing armor and equipment.
The overwhelming majority of the 88 completed Sd.Kfz.234/3 served with the 116th Panzer Division which was at war in Normandy. Data on the operational efficiency of this type was not kept, but at least one Sd.Kfz.234/3 was captured by the British Army. This armored car was examined at one of the allied testing grounds, and then it was sent to the Tank Museum in Bovington, in Dorset in Southern England, where it is exhibited today.