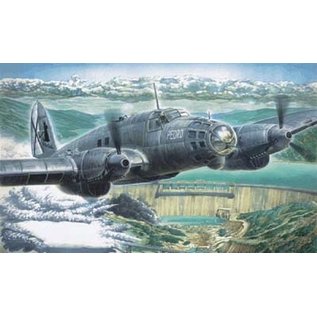 The Spanish Civil War was an excellent occasion for trials concerning the new-generation of planes; the He 111B, Do 17E, and Ju 86D.
During February of 1937 the first four He 111B-1's as well as the Do 17E and Ju 86D arrived from Hamburg. These bombers made up the " Versuchsbomberstaffel" (Experimental Bomber squadron) and operated in the K/88 bomb group. In a short time the He 111B had won a reputation as the "Best of the bombers", and was separated and put into an individual sub-flight with the semi-official name "Pedro". This name would have all the planes together with individual aircraft numbers.
In March 1937 the "Pedro's" achieved their first success in battle, when attacking a Republican airfield near Alcals de Henares. The group destroyed 24 enemy planes on the ground. Later the "Pedro's" took part in the raid on Guernica, which came into history as a symbol of brutality and cruelty, more than 1,500 civilians were killed. The He 111B served in the "Legion Condor" until mid 1938, when they were re-equipped with the more modern He 111E. The majority of the He 111B's were lost in action; others were withdrawn from service in connection with a considerable amount of damage.