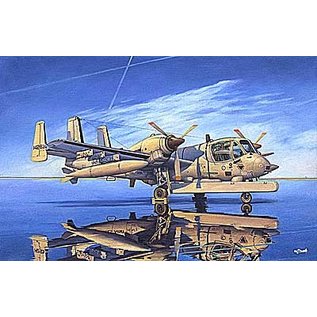 In the mid-1960s the U.S. Army Air Force was equipped with two multi-purpose reconnaissance types, the OV-1B and OV-1C, very similar but differing in their special equipment. In 1967 the U.S. Military command asked the Grumman Corporation for a universal reconnaissance aircraft which could be used for all of their missions (photography, SLAR, IR) at the same time.
The new machine, designated OV -1D, was very similar to the OV-1B at first sight. It had external side-looking radar in the pod beneath the fuselage (with a slightly revised outline in comparison with the OV-1B). The rear fuselage equipment bay was enlarged, and a new blister was added underneath for a panoramic camera system. The rear fuselage airspeed brakes, deleted on the OV-1B and OV-1C, had now been reinstated. For additional ventilation of the cockpit the air scoops on the fuselage were enlarged.
Other changes were connected with the choice of special equipment. The OV-1D had improved avionics, navigation system and radio equipment.
After successful trials the new type was ordered immediately. 37 new planes were ordered from Grumman, and another 108 were converted from OV-1Bs and OV-1Cs. All new OV-1Ds received more powerful Lycoming 1-53-701 engines. The 37 new aircraft were delivered during December 1970, and the 108 others were converted to the new standard by 1980.
First operational experience quickly proved that upgrading had been the correct decision. Conversion from SLAR to IR configuration could be accomplished in less than a hour, and the OV-1D could be ready for a new mission very quickly. Combat experience in the Viet Nam War led to improvement in many defense systems. At the same time a new all-surface reflective grey paint scheme was successfully tested. This new paint reduced visibility and IR reflection. Soon all OV-1Ds received the grey paint scheme.
The first real combat use of the OV-1D, like for the other OV-1 versions, was in Viet Nam. The OV-1D was also delivered to the US Army Group in West Germany during the latter days of the Cold War, and to South Korea, where the USAAF had a very large force stationed.
France and Germany planned to purchase the OV-1D but these plans were later cancelled. The only OV-1Ds to be exported were two OV-1Ds delivered to Israel, where they were used to support the monitoring of the Yom-Kippur War ceasefire, but in 1984 both OV-1Ds were returned to the USA. Argentina also planned to purchase twenty OV-1Ds, but economic crisis in the country forced cancellation of the contract.
The last combat use for the OV-1D was during the Desert Storm operation against Iraq in 1991. As usual, they were used for reconnaissance. The Iraqi AA system had been quickly destroyed and the OV-1D suffered no losses.
Like the OV-1B and OV-1C, the OV-1D was also used in non-military operation. The Custom Service, the Department of the Interior, and the Geological Survey used the type extensively.
Some OV-1Ds were converted into the RV-1D during the ELINT (electronic intelligence) program. And after the introduction of the GPS system in the mid- 1980s, all OV-1Ds were re-equipped with GPS.
In the mid-1990s the Mohawk was declared obsolete and withdrawn from military service. The majority were destroyed, while some were transferred to the Davis Monathan Aircraft cemetery. But some OV-1Ds were lucky and passed into the hands of this machine's many enthusiasts. Now they form 'OV-1 Associations' and every year they give demonstration flights of this unusual looking machine, whose service is still going strong after more than 30 years.