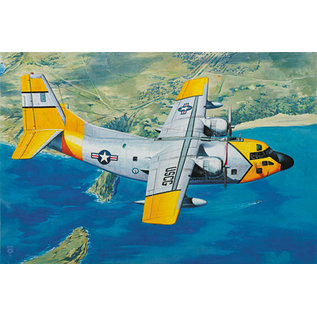 In the middle of 1955 the first aircraft entered service with the Air Force, receiving its official name of 'Provider'. Outside the Air Force, the Coast Guard became interested in the plane, and soon it received own version, the HC-123B. The Federal Aviation Administration, which controlled air transportation in remote regions of the country such as Alaska, also received the C-123, as the plane performed very well in extreme conditions.
In early 1958 the U.S. Coast Guard became interested in the C-123 and bought six machines for the role of patrolling coastal areas. In the plane's nose was installed an AN/APN-158 search radar. This was slightly larger than the space available, so for this purpose, the shape of the nose fairing was altered, and the plane now designated the HC-123B, at once acquired a characteristic 'pug nose', which quickly gained it the nickname 'Thunder Pig'. HC-123B's were engaged not only in coastal patrol, but quite often the delivery of freight to remote areas of Alaska or Hawaii. Some machines were stationed for a while at the U.S. Air Force air base in Naples in Italy.
From the very beginning the Coast Guard leadership viewed the HC-123B as a transitional type and there was therefore no question of large-scale purchases of this airplane. With the advent of the more modern HC-130, they were gradually taken out of service. At least one of these machines was presented to the Thailand government. It was utilised until the mid 1980s.