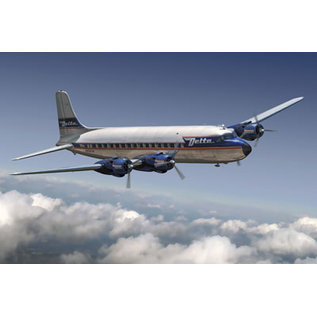 After the entry of the United States into WWII a significant number of civilian aircraft was mobilized for the army. The Douglas Aircraft Corporation, which not long since had created one of the most famous machines of the Twentieth Century, the DC-3 Dakota, soon developed a new one, the more powerful C-54, which was named the Skymaster and successfully used as a medium transport until the end of the war. In 1944 the Douglas firm made major changes to the design of the C-54 and as a result the new C-112 appeared. It was bigger and heavier than its predecessor, although it inherited the basic concept of its design. But the war was coming to its end and the military declined to accept the new machine into its inventory. The optimal solution in these new conditions was to remodel the military transport aircraft as a passenger airliner, in view of a likely boom in air transportation immediately after the war. The civilian version of the C-112 was named the DC-6 and in 1946 successfully gained its certification. The following year the first series production aircraft were delivered to customers, among which were leading American carriers such as United Airlines and Pan American. Series production continued until 1958, during which time the factories produced more than 500 aircraft of different variants of this type, the most numerous of which was the DC-6B. In 1952 they flew their transcontinental flights as a tourist class aircraft for the first time, which greatly contributed to the growth of air transport because of its accessibility for the middle classes of society. With the appearance of the more modern DC-7 in the late 50's, the "Six" was relegated to secondary routes, and resold to third world countries. Their fates were various, but some machines were in use even thirty years after their manufacture - longevity in the air has always been a "calling card" of civil aircraft from Douglas. In the opinion of many aviation experts and historians the DC-6 is one of the classic planes of the twentieth century and of civil aviation in general. Its elegance, combined with its superb flight performance, set a new standard in aircraft forever.