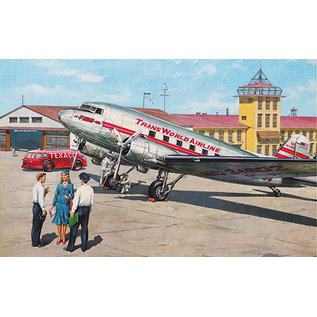 In 1934 American Airlines approached the Douglas company - manufacturer of the DC-2 aircraft, which it had operated successfully for some time - with a proposal to improve the machine to make it capable of nighttime transcontinental flights. Such flights, though emblematic of a luxurious and expensive lifestyle, were already winning increasing popularity among Americans, and the DC-2 was rather small for accommodating enough berths. As a result appeared the Douglas Sleeper Transport (DST), a transport with 16 comfortable berths which made its first flight at the end of 1935. And few could have imagined that this aircraft would overcome all limits of longevity, and would even be being operated at the beginning of the XXI Century.
Later it was rebuilt in a standard passenger configuration with 24 seats, and was designated the DC-3. To cross the United States from one coast to the other, now took only 16 hours, with two intermediate stops for refueling, while this same journey by train lasted four days in a row. This is the machine whose reliability, and ability to operate even in conditions normally unsuitable for aircraft (at that time), won it popularity not only in the U.S. but also worldwide. Overall more than
10,000 vehicles of this type were built, in different versions, and more than 6,000 under license in the Soviet Union and in Japan.
The plane absorbed all the best qualities of its predecessor and to present-day eyes has a classic design; although at the time some features, and its general configuration, were considered to be revolutionary. In only four years of operation, while airlines laid an extensive network of internal flights, air passenger traffic grew by 600 percent, and it was largely thanks to the DC-3. The plane achieved fame as "the safest passenger plane of all time" and it is not surprising that all national flag airlines featured it as the main component of their fleets until the appearance of larger four-engine machines.
After World War II there was a big push for the emergence of heavy four-motor transport planes, and it might have seemed that the fate of the DC-3 was decided, however this opinion was quite wrong. It conceded its role on long distance flights to the bigger DC-4 and DC-6, both in the USA and on transatlantic flights, however within the country, over short and medium distances, a replacement was not available for several years. Most machines are resold again, in the variety of places around the world where they survive, although they are less and less frequently found nowadays. So the plane created for the comfort of the elite became amongst the most popular of all the airliners which have ever risen into the air in the entire history of air transportation.