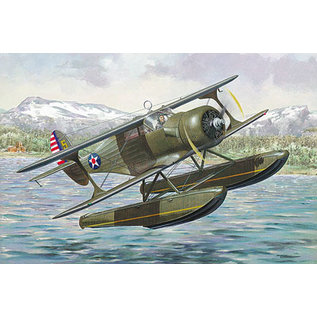 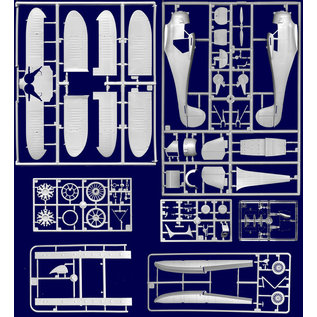 The practice of converting airplanes with standard wheeled undercarriage into floatplanes, to permit them to touch down on the surfaces of lakes and reservoirs, was established in the early days of WWI, when military aircraft of various kinds (fighters, secret agent transports, even bombers) had to operate in areas where bodies of water were plentiful. This innovation was evidently a very successful type of design, and, in spite of the widespread distribution of such comparable airplanes as flying-boats and amphibians, it continued to be employed in the post-war years for various categories of aircraft.
The conversion was useful for small commercial airplanes which could then land on the surface of lakes or even ponds with sometimes limited water area.
The Staggerwing airplane from the Beechcraft firm was a good example of this kind of machine, being ideally suited for such tasks. It was very fast for its time, and had very short take off and landing runs. In 1935 a B17L was experimentally re-equipped with a set of EDO type floats, each with a displacement of 452 pounds. One airplane was purchased by Thomson Airways from the state of Maryland. It featured in the Hollywood film "Too Hot to Handle" in 1938 with the world famous stars Clarke Gable and Myrna Loy in leading roles.
After that machine, floats were fitted to other versions of the Staggerwing. Apart from the United States of America they were also used in Canada (in 1940 that country's Ministry of Transport purchased the SD17 for use on the Great Lakes) and in Australia (one machine was used at least until 1944).
With the onset of WWII, and especially after the USA's entry into the war in December of 1941, a great number of civil machines were requisitioned by the government for military use. Some float Staggerwings had this fate, along with their land based equivalents, and were given the military designations of GB-1 and GB-2. These airplanes were used both in the mainland USA and in more remote areas of the country, in Alaska. Their active service was quite extensive: they had to look out for potential saboteurs entering the country and their attempts to damage large reservoirs. Certainly, the likelihood of such a situation was small, but it did not diminish the part played by the Staggerwing in military applications.
After the end of the war the former civil, then military, airplanes became mainly civil again, being released by the government to civil aviation once more, to airline companies and private owners. Some Staggerwing floatplanes were being used for commercial purposes as late as the early 1970's.