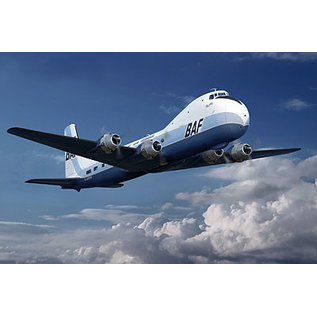 In Great Britain at the end of the 1940's, a new kind of aviation business became popular the speedy delivery of travellers by air from the island to the continent together with their automobiles. To fulfill this need, some aviation companies used the Bristol Freighter transporter, which had a sliding ramp in the fuselage nose. However, the Freighter had a limited loading capacity, and the newer products of the British motor industry would not fit into the restricted space of the airplane's cargo bay.
Owner of a small aviation company, Aviation Traders Ltd (ATL), Freddie Laker decided to redesign an existing airplane type, enlarging its nose.
For this project he chose the Douglas DC-4, which was outdated for passenger travel by then. The nose of the Bristol Freighter was taken as a model for the design; the cockpit was placed unusually high in comparison with other airplanes, directly above the forward part of the cargo bay. Two different loading configurations for the airplane were envisaged - 5 cars and 22 passengers, or 3 cars and 55 passengers. The redesigned passenger compartment allowed the loading configuration to be changed over quite quickly, according to the clients' requirements. The first flight of the new airplane, given the name 'Carvair', took place in the summer of 1961. The modification into a transporter had cost almost 80 thousand pounds, considerable enough for the time.
In all, 21 DC-4's were rebuilt, 18 of them being delivered to British United Air Ferries, and three more purchased by Ansett of Australia.
Carvair operations began, strangely enough, not in Great Britain, but in Africa, where airplanes were leased by the UNO for the delivery of loads to Congo. The airplanes began to be used in Europe from 1962 onwards, and two years later one of them even played an unusual role, taking part in the James Bond feature film 'Goldfinger'.
Eight machines were lost of the 21 built, through flying accidents, and the remaining 13 machines were operated in Europe until the beginning of the 1980's, although by then their initial purpose of the fast delivery of passengers with their vehicles was not so important, as it had been in the first few years of service. By the mid 1970's British United Air Ferries began to retire the ATL-98, and resold a number of machines to the United States, Canada, France, Ireland and Spain. Gradually, the airframes began to lose their integrity, and some of them were sent to be scrapped. However a few machines were resold once again, to South Africa, where their lives continued until the beginning of the new century. Currently, two airplanes of this type survive, one in private ownership in the USA, and the other, in South Africa.