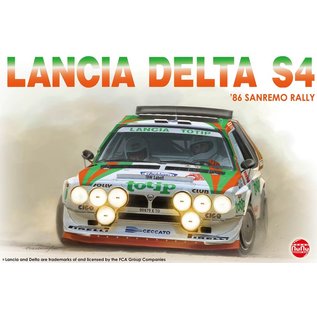 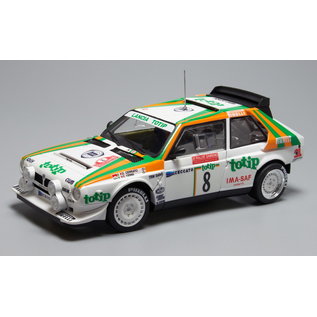 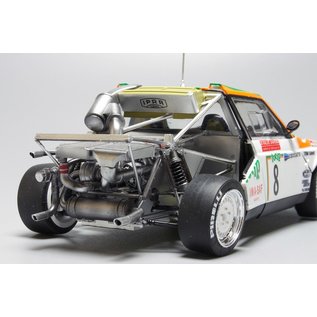 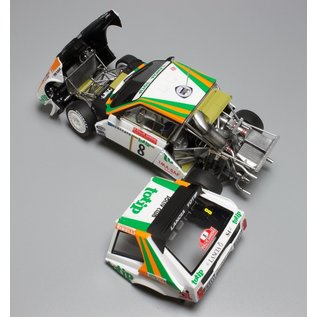 This is a 1/24 scale unpainted assembly plastic model full detail kit that reproduces the Lancia Delta S4 which was active in 1985 and 1986 Rally.

• Paint and Glue are not included.
• Finely reproduce the machine ran by the Italy's prestigious privateer Jolly Club team in TOTIP livery.
• Featuring a newly tooled auxiliary head lights and openable front and rear cowl after assembly.
• The interior parts such as roll cage, various equipment for rally car, are reproduced finely in detail.
• Marking for the car No. 8 that won in second place in the 1986 Sanremo Rally.
• The finish is about 170mm in length, 77mm in width.

The rally car of Lancia, Delta S4, showed its power and made its debut win in the season-ending RAC Rally of the 1985 WRC season. The body design left the image of consumer car Delta, and the chassis with mid-mounted engine adopted a steel tubular space frame construction. It was a Group B model that challenged the rally field by combining a full-time four-wheel drive system. Besides the works team Martini, the prestigious Italian privateer, Jolly Club team also run in TOTIP livery. Not only the WRC, DELTA S4 also ran for many rallies such as the European Rally Championship and the Italian Rally Championship, and showed its high performance.