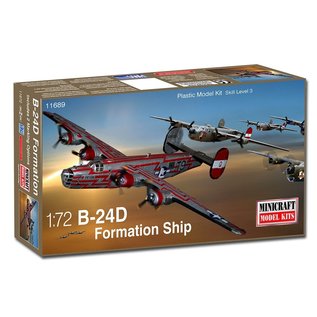 The B-24 Liberator was used in every theatre of operation in World War II and produced in greater quantities than any other aircraft in history. The B-24 evolved through its service life beginning as a heavy maritime patrol bomber. It was the longest-range heavy bomber in United States inventory during much of WWII.The United States Army Air Force introduced the concept of daylight strategic bombing early in World War II.  The strategy was designed to destroy enemy armament production and raw materials needed to conduct modern warfare. The B-24 was one of 2 principle aircraft used. The B-24D was the early version of the B-24 that served in all theatres of operation during WWII. This model kit represents the United Sates Army Air Force B-24D formation ship. Formation ships were decorated in distinctive markings to assemble bombing formations before the flight into hostile territory.  This new kit features new markings and decals representing 2 unique formation ships.