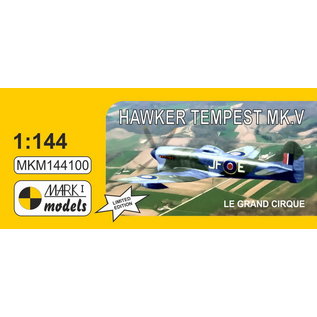 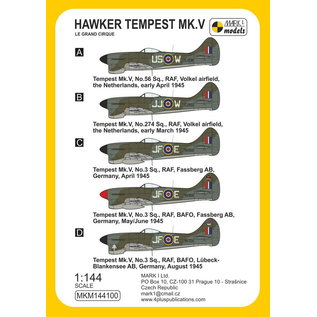 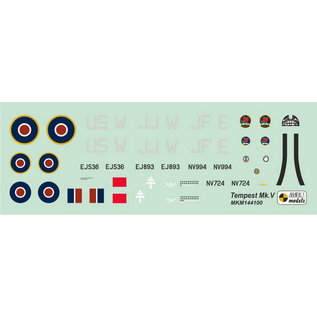 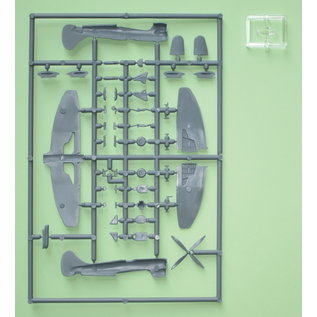 The Hawker Tempest Mk.V was the RAF’s last piston-engined fighter used in the WWII, attaining great success in destruction of the German V-1 flying bombs. Developed in late 1941 from the troublesome Typhoon interceptor, the prototype flew in September 1942. The first order was for 400 Tempests, produced as the Mk.V Series 1 (100 a/c by Hawker) and Series 2 (300 a/c by Gloster); the first aircraft were completed in mid-1943. A further two orders for Hawker-built Mk.V Srs.2 aeroplanes raised the total of the Tempests produced to 801.

It was a single-seat monoplane aircraft, of all metal construction, powered by a Napier Sabre II engine. DH or Rotol four-bladed propellers were used. It featured a bubble canopy and a retractable undercarriage. The Srs.1 aircraft had four long-barrelled 20mm Hispano cannons in the wings, while the later Tempests had cannons without projecting barrels. The Srs.2 aircraft could also carry 45-gal drop tanks. In its later guise, the Tempest could perform as a fighter-bomber, carrying a wide variety of bombs up to 1000 lbs. From early 1945 it was cleared for rocket firing and combinations of 25lb or 60lb RP could be carried.

Tempest Mk.Vs were delivered to the RAF and RNZAF squadrons between April 1944 and July 1945, ultimately equipping nine fighter units and one auxiliary squadron.

During the advance of Allied forces into Germany, ground attacks, close-support sorties and pursuit of Luftwaffe aircraft were the main tasks of the Tempests. After VE-Day the Tempest Mk.Vs soldiered on with seven squadrons of BAFO in Germany, and the last units retained their aircraft until early 1948.