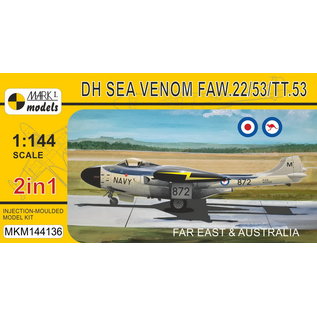 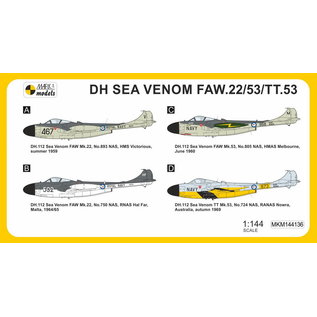 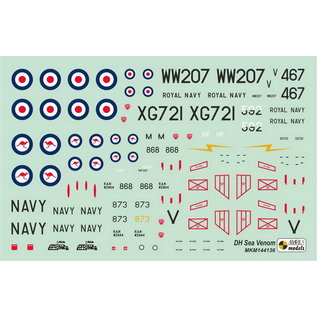 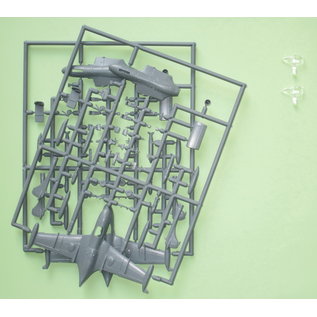 The de Havilland Sea Venom was a British jet all-weather fighter developed for the Royal Navy from the RAF’s Venom NF.2 night fighter. First flown in April 1951, the Sea Venoms were produced as the FAW.20 (50 a/c), improved FAW.21 (167 a/c) and uprated FAW.22 (39 new built and other Mk.21s converted). In total, 256 aircraft were taken on FAA’s charge, while 39 Sea Venoms, designated FAW.53, were delivered to the Royal Australian Navy in 1956.

It was a two-seat monoplane aircraft, of all-metal construction, powered by a DH Ghost turbojet. It featured twin-boom tail configuration, with two wing-root intakes and folding wings with wing tip fuel tanks, clear-view canopy and was fitted with ejection seats (Mk.21/22s). Its armament consisted of four fixed Hispano cannons, while a provision was made for two 500lb or 1,000lb bombs, or drop tanks, or eight 3″ RPs below the wings. The FAW.22s could also carry the Firestreak guided missiles. A handful of Mk.21 and Mk.22 aircraft were modified for ECM purposes as ECM.21 and 22s, lacking the on-board armament, while three RAN Sea Venoms were later converted to TT.53s mounting the Del Mar target tug system.

The Sea Venoms replaced the Sea Hornets piston-engine fighters and were in the FAA front-line service with seven squadrons from March 1954 until the end of 1960. The Sea Venoms also took part in Suez campaign in the autumn of 1956, performing well during army support operations. The last Sea Venom aircraft were withdrawn from the FAA and RAN service in 1970 and 1973, respectively.