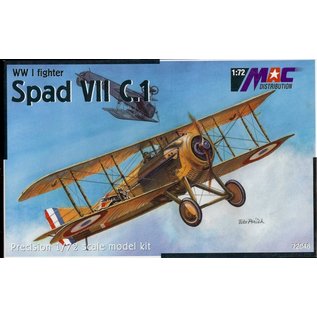 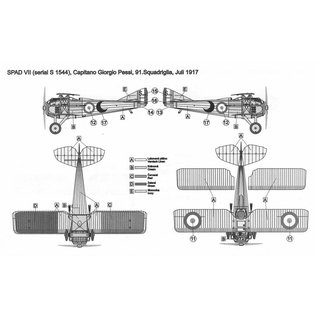 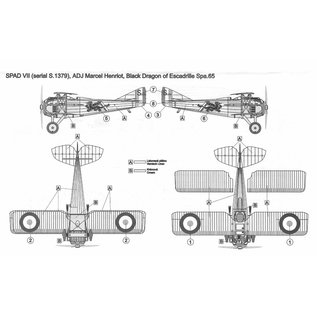 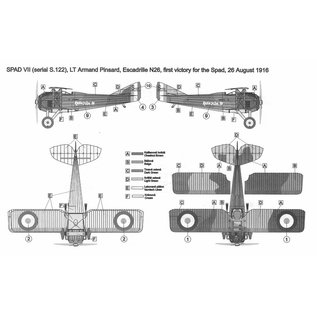 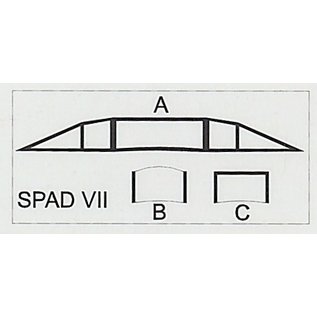 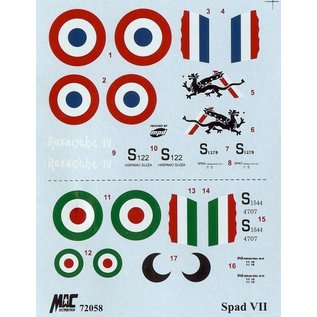 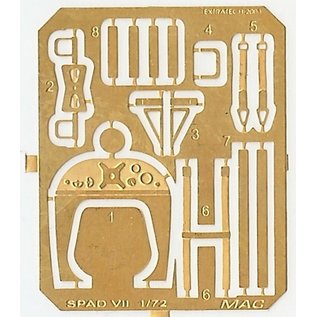 The French reliance on light rotary powered fighters was largely a result of their pre-eminence in the design and production of these engines, but the appearance of a new and technically advanced water cooled vee-eight cylinder engine in spring 1915 would have a profound effect on the French and allied aircraft industries. In late 1915 Luis Bechereau of the Societe pour Aviation et ses Derives designed a trim little single-seater biplane which proved to be one of the outstanding airplanes of the First World War. The prototype had the 140 h.p. Hispano-Suiza engine. The 150 h.p., 180 h.p. and 200 h.p. Hispano engines were installed as they became available. Production machines reached the front in the autumn of 1916, and the type quickly became popular. The S. VII will always be associated with the Stork Group (Les Cicognes) and the names of Fonck and Guynemer. At the end of August Esc 3 began to receive some of the first production models of the SPAD S VII. Guynemer took to his new mount, despite expressing early doubts, scoring his fifteenth victory on 4th September. With the early adoption of the more powerful 180hp Hispano Suiza the SPAD S VII was a significant improvement on the Nieuports then in service. France would not boast an orthodox two gun fighter until the first half of 1918, a year after the Sopwith Camel and two years after the Albatros D. II. The Spad VII however, was able to eliminate this handicap by application of appropriate tactics of concentration of elite pilots. This airplane was an immediate success, primarily because of its structural ruggedness which permitted it to dive at high speeds without disintegrating and marked the beginning of the end of the rotary engine era. Spad VII's were very popular in French and Allied pilots. About 5 600 machines there were total built. About 220 machines were built in England and 100 ones were built by Russian Dux factory. The famed American Lafayette Escadrille was using the Spad VII in February 1918 at the time it transferred from the French Aviation service to the Air Service, American Expeditionary Force (A.E.F.), and became the 103'd Aero Squadron. Spad VII’s were also widely used after the war including Asian and American Air Forces.