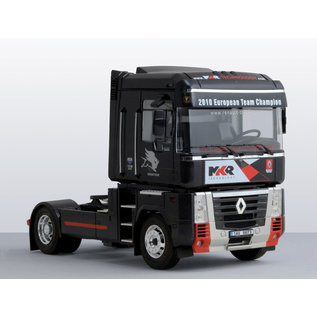 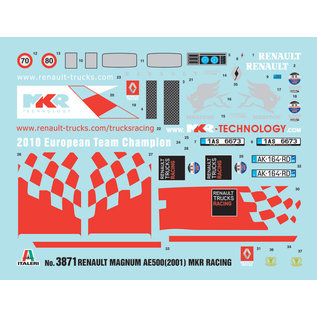 Since the early nineties the Magnum has been part of the truck range of the French truck manufacturer and has become a common sight on European roads. 2001 Renault presents a new version with a number of improvementes and changes, such as a new grill, a new roof spoiler, and  a modified dashboard. The engine has been re-designed for improved fuel-efficiency. The cabin, offering top comfort to the driver, can be tilted by almost 90° forward for maintenance and is in the top category as far as comfort is concerned. This model reproduce the actual MAGMUM tractors used from the  MKR Technology partner of the RENAULT TRUCK, team invoveld in the  “ FIA EUROPEAN TRUCK RACING CHAMPIONSHIP”.