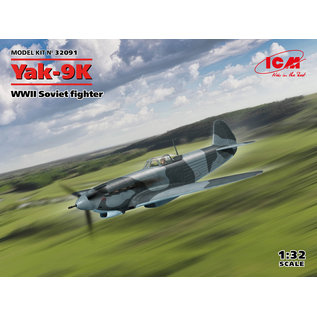 The Yak-9K is a front-line fighter with heavy cannon armament. It became a continuation of the Yak-9 fighter line and a modification of the serial Yak-9T aircraft. Its feature was a 45-mm gun NS-45, which was placed in the vee of the engine and fired through the gearbox shaft. To reduce the force of recoil when fired, the barrel of the gun was equipped with a clearly visible muzzle brake, which absorbed up to 85% of the energy of the shot and was the main visual difference of the aircraft. The armament also included a large-caliber UBS machine gun. Shooting from a cannon and a machine gun could be conducted simultaneously, and they could also be used separately. The ammunition consisted of 29 cannon shots and 200 cartridges for the machine gun. Powerful gun armament made it possible to hit enemy aircraft with a single projectile. These aircrafts were involved in combat operations at the front and were recommended for adoption as one of the main types of fighters. However, its 45 mm gun was underdeveloped, and despite its powerful armament, the fighter was only produced in a small series.