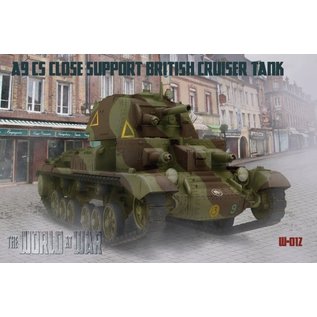 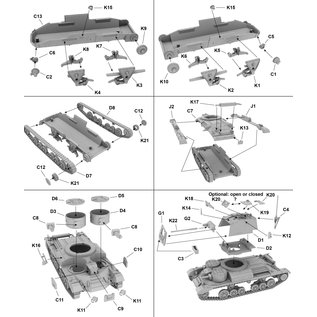 “Cruiser Tank” was the British term for its medium-weight tanks intended to be used by Armoured Divisions. The first of these was known as the A9 after the original War Office specification for the type. The naming system changed in mid-1940 after which it became known as Cruiser I. Development took place at a slow pace by Vickers. The earliest design sketch was drawn in 1934, building work on the prototype began in late 1935 and following trials and modifications it was accepted for service in June 1937. Production began in January 1939, by the outbreak of World War II in September 1939 there were 35 in service. The last of 125 vehicles was delivered in June 1940. Armour protection was no more than 14mm but its 2pdr main gun was as good against tanks as any comparable weapon of that time. Secondary armament was one .303” Vickers water-cooled machine gun mounted next to the 2pdr, two more machine guns were fitted in small turrets at the sides of the driver. This meant the crew was six men. Some tanks carried a 3.7” Mortar in place of the 2pdr to fire smoke shells.