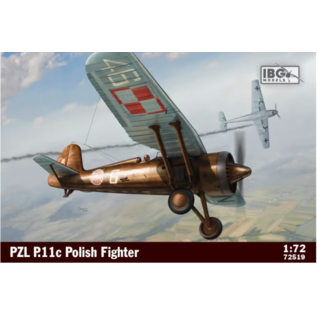 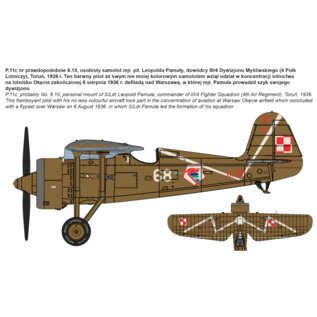 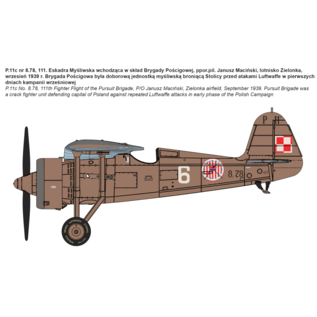 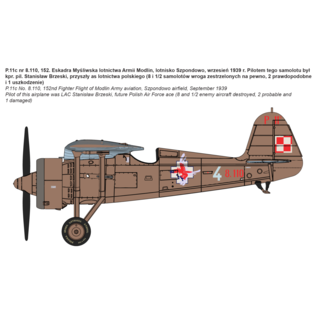 PZL P.11c is the most famous Polish fighter, numerically the most significant version in the long line of Zygmunt Puławski airplanes, further developed after his death under Wsiewołod Jakimiuk’s supervision.
After successful P.11a and P.11b versions, PZL company developed between 1933 and 1934 an improved version of the fighter with a redesigned hull and tail, newer and stronger version of Bristol Mercury engine and a possibility of installing additional wing armament. Lessons learnt from the service of previous versions were taken into account, which resulted in the engine being lowered to improve pilot’s field of view. Changes in fuselage construction included extension of truss to the end of the cockpit in the way that the semi-monocoque construction started behind the pilot’s seat. 150 of these aircraft were ordered by Polish Air Force and their production started in late 1934. Most of the order was delivered next year, with the final batch completed in 1936.
PZL P.11c airplanes entered service in fighter flights of the Polish Air Force in 1935 being considered a very advanced construction. The all-metal monoplane with the (optional) armament of 4 machine guns stood out clearly from the canvas-covered biplanes armed with 2 MGs, which were then predominant in most other air forces. A characteristic feature of the P.11c was also the fact that it was almost entirely based on raw materials and components of domestic production, which reflected the strength of the Polish aviation industry.
The introduction of modern low-wing aircraft into fighter units of Luftwaffe and other major aviation powers in 1937-39 made the P.11c an obsolete design. Unfortunately, its successor has not been built in time and during the Polish Campaign of 1939, twelve flights armed with P.11a and P.11c still constituted the backbone of Polish fighter aviation. They took part in hostilities from the very first day of the war, heroically facing the overwhelming might of the Luftwaffe. As a result of the Soviet attack on 17th September 1939, the surviving fighters evacuated to Romania, where they were interned and then operated by Romanian aviation in parallel with the locally built version – P.11f.
Only one copy of P.11c survives today and is can be seen in the collection of the Polish Aviation Museum in Krakow.