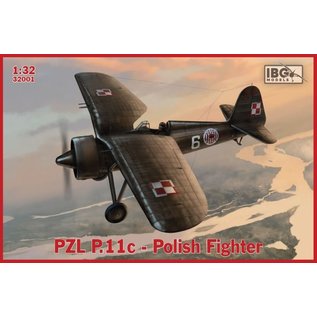 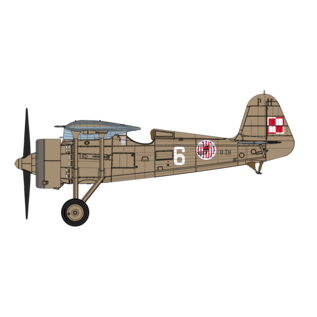 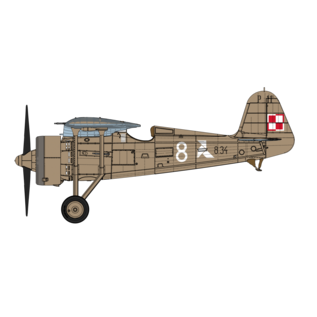 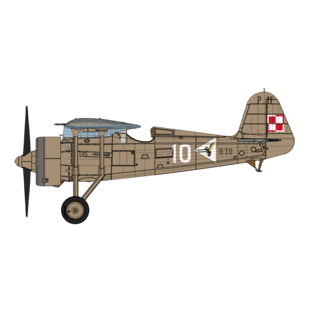 PZL P.11c was a fighter plane, an improved variant of P.11a version, which was a development of P.6 construction of inż Z. Puławski under inż. Wsiewołod Jakimiuk’s supervision.
After succesful P.11a and P.11b versions, in 1933 and 1934 PZL manufacturer has developed an improved version of the fighter, with a redesigned hull and tail, newer Bristol Mercury V engine version, and a possibility of placing the armament inside a wing. Engine cowling was lowered to improve pilots field of view. Changes in fuselage construction included extension of truss to the end of the cockpit in the way that the semimonocoque construction started behind the pilot’s seat. 175 of these aircraft were ordered by Polish Air Force and the construction started in 1934. Most of the order was delivered in 1935, last planes finished in 1936.
PZL P.11c airplanes entered service in fighter squadrons of Polish Air Force in 1935 and were their most valuable equipment during the Polish Campaign of 1939. These aircraft served in 1st Air Regiment(AR) in Warsaw, 2nd AR in Cracow, 3rd AR in Poznan, 4th AR in Torun, 5th AR in Lida and 6th AR in Lwów and took part in the Polish Campaign from its outbreak on 1st September 1939 until evacuation forced by the Soviet attack of 17th September. Evacuated airplanes were incorporated into Romanian Air Force, where they served along the locally constructed P.11f version.
Only one PZL P.11c survives today. It can be found on exhibition of Polish Aviation Museum in Cracow.