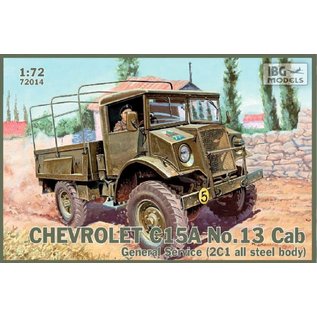 Chevrolet C15 and C15A was one of the first vehicles built in Canada for the special military order CMP. Productions was started in 1940 by General Motors of Canada. Cars were equipped with two cab variantions: No.11 or No.13. The C15A version had two-axis drive. Identical cars were being built in Ford factories under sign F15A. C15A served as light trucks, infantry transporters, tankers, communication vehicles, staff cars, tractors and self-propelled anti-aircraft batteries. Until the year 1945 390000 vehicles were built for the CMP (Canadian Military Pattern) program.