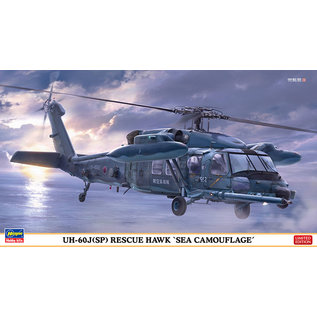 In 1988, the Japan Air Self-Defense Force choose the UH-60L to replace its KV-107 and Sikorsky S-62 helicopters. The first aircraft was built by Sikorsky, with the company designation S-70A-12, and two more were assembled by Mitsubishi Heavy Industries. Mitsubishi is producing the remaining UH-60Js under license. The Japan Marine Self-Defense Force also chose Search and rescue, and utility helicopters to replace the S-61A in 1989.

The UH-60J is powered by T700 engines license-built by Ishikawajima-Harima Heavy Industries in Japan. It features external fuel tanks, an external rescue winch, a Japan-built radar, a FLIR turret in the nose and bubble side windows for observers. The Japan Air Self-Defense Force machines were fitted with T700-IHI-701A engines, while Japan Maritime Self-Defense Force machines were fitted with marinized T700-IHI-401C engines. Fuel tanks can be attached to pylons on stub wings. The UH-60Js began deliveries in 1991 and entered service in 1992. A total of 40 UH-60Js were in service in 2010. The JASDF ordered 40 newer UH-60Js in December 2010 to begin replacing older UH-60Js.

Mitsubishi and Sikorsky have teamed in support of the Self Defense Force's mission requirements. The UH-60J+ incorporates various upgrades for the modern SAR mission. By 2006 Defense budget of Japan, UH-60Js begin addition of Refueling probe in 2009. These UH-60Js completed training with the United States Air Force and widened their activity in SAR mission.