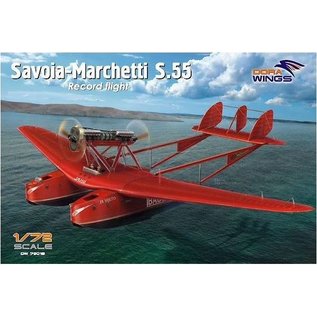 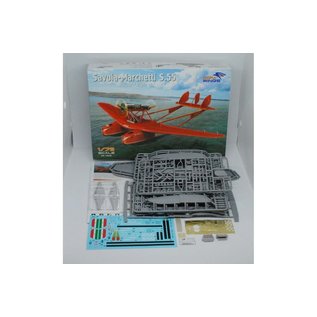 The Savoia-Marchetti S.55 was a double-hulled flying boat produced in Italy, beginning in 1924. Shortly after its introduction, it began setting records for speed, payload, altitude and range.

The S.55 featured many innovative design features. All the passengers or cargo were placed in the twin hulls, but the pilot and crew captained the plane from a cockpit in the thicker section of the wing, between the two hulls. The S.55 had two inline contra-rotating propellers, mounted in tandem. The engines were canted sharply at an upward angle. Two wire-braced booms connected the triple-finned tail structure to the twin hulls and wing.

The first S.55 crossing was made in 1927 by the Santa Maria under Francesco de Pinedo. After flying south to Bolama, at that time in Portuguese Guinea they hoped to cross the ocean without another stop but were forced down at Cape Verde, reaching Brazil on 23 February 1927. After the crossing, the aircraft was traded to Brazil for coffee beans.

The Brazilian Joao Ribeiro de Barros and his crew of three made another crossing in S.55 "Jahu" on 24 April 1927. Departing from Santiago Island, he crossed the Atlantic in "Jahu" and landed at Fernando de Nononha Island, Brazil.

Pilots Francesco de Pinedo and Carlo del Prebe took off from Sesto Calende, Italy, In an S-55. Four months later, they arrived back In Italy, having flown nearly 48,280 km (30,000 ml) in 193 flying hours and having made just over 50 stops, Including Rio de Janeiro, Buenos Aires and New York City. Number built 243+.