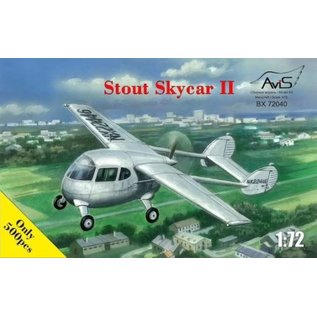 The Stout Skycar was a series of four one-off American light aircraft of the 1930s
William Bushnell Stout was a prolific designer of road vehicles and aircraft, including the Ford Trimotor series. He was founder of the Stout Metal Airplane Division of the Ford Motor Company and in 1931 designed the Skycar which was specified for easy handling and provided with automobile-style comfort. Single examples of four variations on the basic design were produced between 1931 and 1944.[1]

The Skycar I was first displayed at the spring 1931 Detroit Show. The aircraft was a two-seat high-wing monoplane, accommodating the occupants in tandem layout. It had an all-metal steel-tube frame covered with corrugated metal skin. Centre-line nose and tail-wheels plus a standard landing gear were fitted. The rear fuselage was constructed from an open framework carrying a single fin and rudder, inside which was located the rear pusher engine. The Sky Car was displayed with a Moorhouse engine (Alfred Moorhouse of Detroit, assignor to Packard Motor Car Company). Fuel was carried in two tanks in the leading portion of the central section of the engine housing, from where it was fed by gravity to the engine. At a later date the aircraft was fitted with twin booms carrying the single fin and rudder (see photo of preserved aircraft). The aircraft featured balanced pivoting outboard wingtips rather than ailerons. Stout attempted to design a simple aircraft that would have controls similar to early model Fords including the ignition switch and the starter button. Stout planned to build the Sky Car (i.e. its original name was "Sky Car" but various newspaper and magazine articles spelled it "Skycar") and sell it at the price of a moderately priced car (approximately $2000) if mass-produced in numbers.

The Skycar II of 1941 was a higher-powered version utilising stainless steel construction and twin tail booms. The four-wheel landing gear was intended to facilitate a later rebuild to roadability which never occurred. It was built with support from Fred Fisher of General Motors.