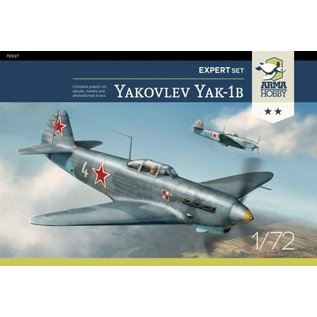 Yak-1b is one of the most famous fighter aircraft of World War II. Its history began in the late 1930s when J. Stalin commissioned the development of a modern fighter aeroplane, whose performance would match the British Spitfire and the German Bf-109. The new fighter was to be made of readily available materials and based on engines produced from the USSR. The prototype marked as I-26 was flown on January 1940. During the tests, some flaws in the new design were revealed, which were successively eliminated to send the aircraft into serial production in February. The new aircraft was first shown to the public during the parade on November 7, 1940, in Moscow.

The Yak-1 turned out to be a very successful construction; it had excellent manoeuvrability and stability in flight. It was also easy to fly. The basic structure of the aircraft was modified continuously and improved. In June 1940 one of the serial machines was rebuilt, lowering the rear part of the fuselage and installing a teardrop cockpit's canopy. Also, a retractable tail wheel was introduced, a new WISz-105 propeller and the oil cooler was adopted from the Jak-3 fighter. Besides, the armament was modified - two 7.62 mm SzKAS km were replaced with one 12.7 mm UBS, and 20 mm SzWAK gun remained unchanged. In July 1942, state trials of a modernized fighter jet were carried out, and the aeroplane was designated as Yak-1b. In the past, this aircraft was referred to in the literature as the Yak-1M. It was not correct because it was an initial designation of the other aeroplane: the Yak-3.

Jak-1b fighters passed baptism of fire during the fighting at Stalingrad and the Battle of Kursk (campaigns 1942/43). At that time, they were equal to the Messerschmitt Bf-109F and Spitfire V planes. Jak-1 and Jak-1b fighter aircraft were used in combat to end of WW2 hostilities. In addition to Soviet Air Forces, these planes also entered the service of two Allied units - the French Regiment "Normandie - Niemen" and the 1st Polish Fighter Regiment "Warsaw". The regiment took part in the fighting over Warsaw, the Pomeranian Wall breakthrough, the capture of the Kołobrzeg and in the Berlin Operation. Yak-1b planes remained in Polish Aviation equipment until 1946.