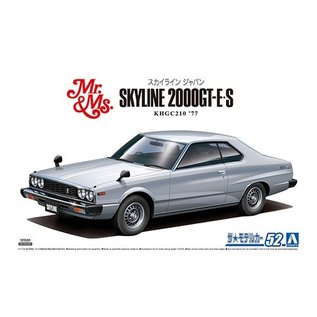 Released on August 1977 as the 5th generation Skyline, the C210 series was a full model change from the previous C110 series. With its TV commercial using the same young couple as the C110 series, the model earned the nickname 'JAPAN' from the catch copy, 'SKYLINE JAPAN'. Inheriting the Skyline's long-nosed short deck style, round tail lights and surfing line style, it added a notch-back body, separate trunk and straight-style design. This gave the C210 a stylish, new design of the new generation. The 'JAPAN' Skyline continued to sell well with a total production of 540,000 vehicles.
This kit replicates the 'JAPAN' 2000GT-E/S in its catalog spec. The molds for this kit was designed and developed in the 1970s and may not be at the quality of replication in today's standards. However, with the updated mold for the front grille, rear tail lights and bumpers, the final construction has been improved. Also, with the additions such as optional aluminum wheels and license plate, you are able to build the kit to your preference.