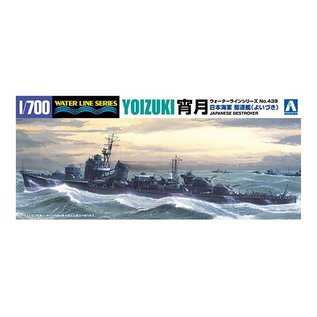 YOIZUKI was completed in January 1945 at the Uraga Shipyard as the 10th ship of the air defense destroyer Akizuki type. Belonging to the 11th Mine Action Squadron, she engaged in anti-aircraft gun battles during the air raid on Kure Military Harbor in March.
In June, she was damaged by magnetic mines and was sent to Kure for repairs, but was subjected to intermittent air raids.
In August, the ship was hidden in Hiroshima Bay in preparation for the war on the mainland, but after the war ended, she was engaged in transporting demobilized personnel.
In 1947, the she was named Fengyang and delivered to China as a wartime reparation ship, and served its purpose as a training vessel.