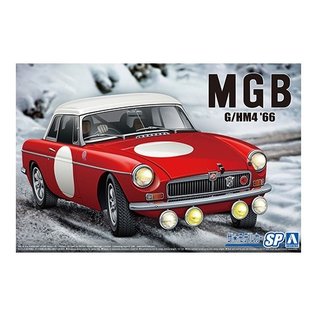 From its debut at the 1962 London Motor Show until October 1980, estimated 520,000 MGB were sold, making it a worldwide long-selling vehicle. In its 18 years of production, the basic body structure, chassis and engine did not go through major changes, but constant improvements were applied. Therefore, the production year/month of the MGB can be identiﬁed by checking details of exterior, interior, and engine room.This kit is a pre-assembled plastic model of the MGB and replicates the specifications that were used in the late 1960's for racing. The elegant grille and bumper are plated. The wheels are eight-spoke specifications.Furthermore, window frame masking stickers and etching parts are also included, allowing you to make the MGB more realistic.