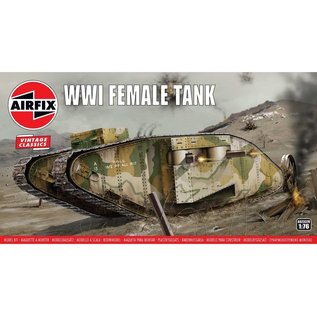 The 'Female' version of the MkI tank was produced in larger numbers than its 'Male' partner. This was due to the four Vickers machine guns mounted on the sides, which were more effective in combat than the heavier guns carried by the 'Male' tank in the treacherous conditions on the Western Front.

If it's a tank with reliablity and power that you're after then the WWI Female Tank is the next must-buy for your Airfix model collection. Featuring a highly detailed paint scheme as well as the side machine guns emulated from actual tank itself, orders yours to bring home today!