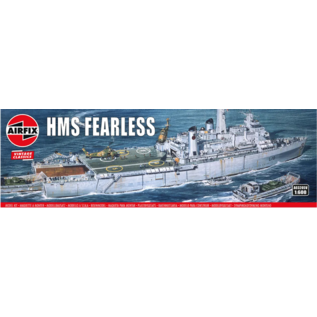 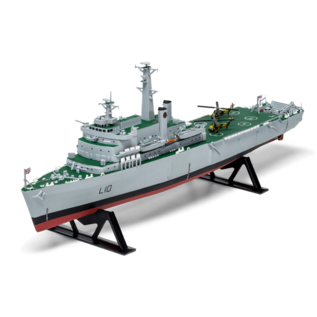 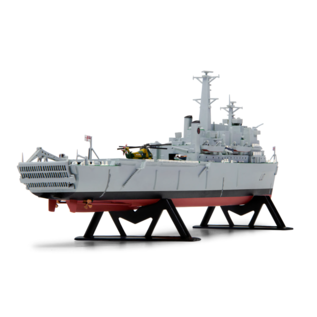 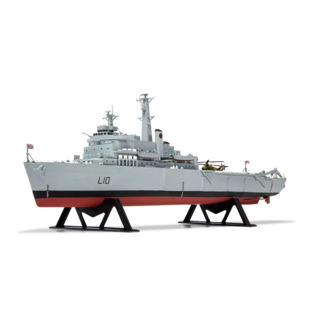 One of the most famous British ships of the post-war period, HMS Fearless was a modern Amphibious Assault Ship known in naval terms as an LPD (Landing Platform Dock), a modern development of the vessels that proved so crucial during the D-Day landings towards the end of the Second World War. The first purpose-built ship of her type to be used by the Royal Navy, Fearless also had the distinction of being the last steam-powered surface ship supplied to the force.

Fearless and her sister ship HMS Intrepid provided Britain and the Royal Navy with an incredibly flexible and highly mobile assault force, able to replenish at sea and therefore capable of steaming to military hotspots anywhere in the world. Her internal vehicle decks could carry 400 troops and their equipment, in addition to up to fifteen Challenger tanks, but this could be increased to 700 troops if no tanks were carried.

The stern of the ship could be submerged to allow the operation of four LCU landing craft, delivering troops and vehicles to the landing beaches quickly and effectively, immediately returning to reinforce the beachhead with more troops. A large flight deck increased the effectiveness of the ship still further, with helicopters usually up to the size of a Sea King further enhancing the flexibility of the ship's delivery capabilities.

During the Falklands War, HMS Fearless played a significant role as part of the British Naval Task Force, acting as a command ship for the operation, with her Bofors guns claiming at least two Argentine Air Force attack aircraft destroyed during the conflict. Following the surrender of Argentine forces on the Islands, Fearless played host to a number of high ranking Argentine Army officers, underlining the importance of her role.

During a notable service career which spanned more than 35 years, when Fearless was not representing the Royal Navy on a global stage, she could be found rescuing James Bond and Anya Amasova in their escape pod from the ocean around Malta, at the end of the movie 'The spy who loved me'.

Decommissioned in 2002, HMS Fearless even made headlines during her disposal, as she became the first Western warship to be disposed of in an environmentally responsible manner.