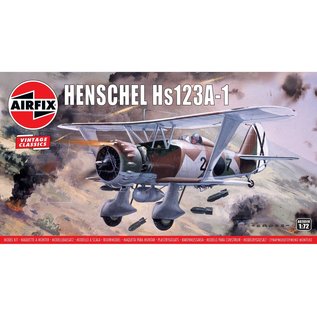 As you might expect from a new aircraft manufacturer previously involved in the production of railway locomotives, the Henschel Hs123 biplane attack aircraft was as tough as they come. Intended as a dive bomber and close air support aircraft, the Hs123 performed well during its combat introduction in the Spanish Civil War, however, its lack of range and relatively small bomb load saw future development suppressed due to the impending introduction of the monoplane Ju-87 Stuka. Despite this setback, the aircraft still in service at the start of WWII were sent into action, with its pilots perfecting the art of close air support for advancing ground units. Proving to be extremely rugged, these agile little biplanes could absorb significant levels of damage, pressing home their attacks and bringing their pilots home safely. Serving through the Blitzkrieg attacks against Poland, France and the Low Countries, the Hs123 would come into its own during the savage fighting on the Eastern Front, where aircraft would be based close to the front lines, flying several offensive sorties each day. The aircraft proved so effective, that they were only withdrawn from service in the spring of 1944 and only then due to a lack of serviceable aircraft and spares.