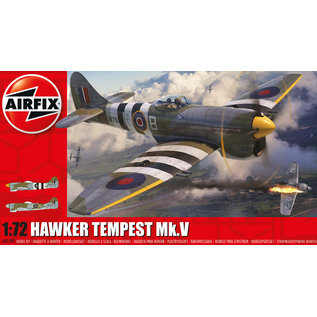 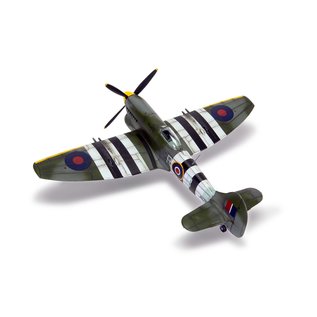 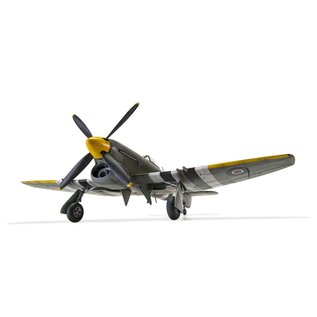 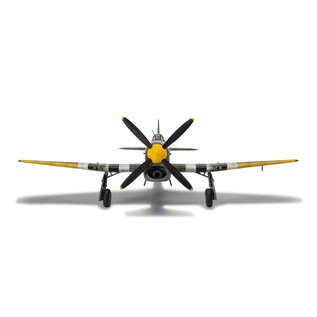 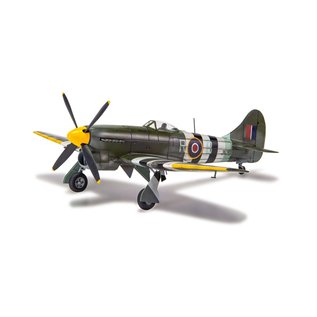 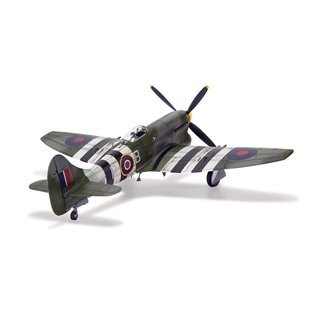 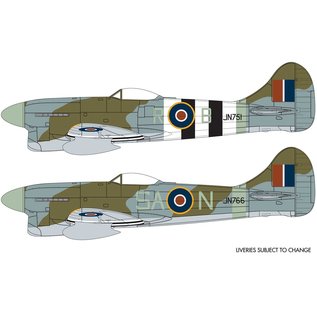 An aircraft which has to be considered one of the finest aeroplanes of the Second World War, the Hawker Tempest V could trace its design lineage back to the Hurricane fighters which proved so decisive during the Battle of Britain only two years earlier, but would represent the absolute zenith of piston engined fighter design. Indeed, when accomplished designer Sydney Camm was looking to produce his '˜Super Hurricane'™ replacement for the aviation saviour of the Battle of Britain, the aircraft he surely had in mind was the Tempest V. As it was, the Tempest is often confused with its predecessor in Royal Air Force service, the Typhoon, even though the two are very different aeroplanes.

The original fighter replacement for the Hawker Hurricane was the Typhoon, an aircraft which attempted to combine the most powerful piston engine available at the time with a small, yet strong and heavily armed airframe. Although intended as an interceptor fighter, it became apparent during development that the new aircraft would not be able to fulfil this role, as the thickness of the wing was not conducive to high performance at high altitude. In fact, the Typhoon would endure quite a troubled development and service introduction, to the point where cancellation of the programme was seriously considered at one time. Nevertheless, the Typhoon would eventually go on to find its aviation niche as a hard-hitting ground attack aircraft and one which would come into its own during the time of the Allied invasion of Normandy.

Aware that their Typhoon had great potential but was in need of improvement, the Hawker design team started work on a new fighter project, one which incorporated many of the same philosophies as Typhoon, but also, several significant modifications. Indeed, the new aircraft was initially referred to as the Typhoon Mark II, but this was changed to Tempest as the prototype aircraft'™s first flight approached. Although this was still a big aeroplane for a single engined fighter, its airframe was light and it would be powered by the massively powerful 24 cylinder Napier Sabre engine, a powerplant which would give the new fighter spectacular performance. Making its first flight on 2nd September 1942, the new Hawker Tempest featured a newly designed laminar flow wing, which was much thinner than the wing used on its predecessor and allowed the new fighter to slip through the air at incredible speed.

At first glance, the Typhoon and Tempest do share many similarities, however, if you know where to look, it is not difficult to tell them apart. Without doubt, the wing is the most obvious distinguishing feature, as not only is this thinner than the one used on the Typhoon, it is also a completely different shape. With a straighter leading edge and more elliptical trailing edge, the Tempest'™s wing was designed for speed, even though it could still be used effectively in a ground attack role. Other Tempest design differences include a slightly longer nose and a tail section which appears to be much larger, with a more generous vertical stabiliser which features a pronounced dorsal fillet. During the prototype aircraft'™s maiden flight, it posted an impressive top speed of 477 mph in level flight, impressing both the design team and the watching Air Ministry.

The Hawker Tempest V entered Royal Air Force service in early 1944, with the first two squadrons to receive the type having both previously operated the Typhoon. It was thought that managing the incredible power generated by the Tempest'™s engine could pose problems for pilots converting from smaller aircraft types and that former Typhoon units would be best placed to negotiate its squadron introduction. In advance of the D-day landings, Tempests were being used in a similar ground attack role to the one being flown so effectively by Typhoon squadrons, however, should it be required to make the shift to air combat operations mid-mission, the Tempest was much more suited to this task. Possessing significantly greater range than the Typhoon, Tempests could loiter in the combat zone for longer periods, allowing offensive strikes deeper into occupied Europe, or allowing pilots to wait patiently for the Luftwaffe to come up and fight, where they could show them what their new fighter could really do.

As the fastest Allied fighter at low and medium altitudes, Tempest squadrons were held back for home defence duties in the weeks which followed the successful D-day landings, due to the onslaught of a sinister new weapon, the V-1 '˜Doodlebug'™ pulse jet flying bomb. The Tempest proved to be an excellent V-1 killer, using the speed of the fighter, effectiveness of its guns and bravery of its pilots to destroy large numbers of these terrifying weapons before they could wreak their havoc on British towns and cities. Britain'™s most effective force against these indiscriminate weapons, hundreds of Doodlebugs were shot down by the RAF'™s Hawker Tempest V squadrons, with Squadron Leader Joseph Berry proving to be the most proficient at this work, with no fewer than 61 V-1 '˜kills'™ to his name.

With the V-1 threat diminishing, the RAF'™s Tempest V squadrons were free to embark on aggressive seek and destroy missions into occupied Europe, using the speed, range and firepower of their latest fighter to great effect. Looking for potential V-1 launch sites and increasingly, the new German jet fighters which had started operating against the Allied air forces, the Tempest began to show that it was undoubtedly one of the most capable fighting aeroplanes in the world. Indeed, it has been reported that the aggressively flown Tempest was the Allied aircraft Messerschmitt Me262 jet pilots most feared during those early days of jet powered operations, particularly if they were caught during the landing and taking off phases of flight, when their jets were much more vulnerable.

There is no doubt that the Hawker Tempest V was a real brute of an aeroplane, fast, heavily armed and possessing performance which could better any fighter the Luftwaffe had in service, perhaps with the exception of the Me262 at full speed. Pilots who had experience flying both the Tempest V and its predecessor, the Typhoon, describe the difference as being like night and day - they actually said that it was like comparing a cart horse with a race horse. Although this seems a little harsh, as they flew the aircraft in combat, we should certainly bow to their judgement. Although appearing relatively late in WWII, the Tempest V still takes its place as one of the most effective piston engined fighters of the Second World War and was perhaps the '˜Super Hurricane'™ designer Sydney Camm had always envisaged developing.