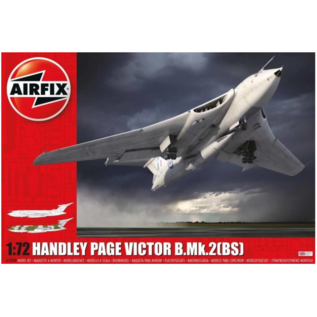 The Handley Page (HP) Victor was a jet-powered, strategic bomber which, alongside the other 'V' bombers, the Avro Vulcan and Vickers Valiant, formed an essential part of Britain's nuclear deterrent during the early part of the Cold War. The Victor was designed to carry out long-range, low-altitude attacks, but was later relegated to an aerial refuelling role when it was no longer deemed effective as a strategic bomber. Subject to the RAF's requirements for greater tactical manoeuvrability and a higher ceiling, the B.2 variant with much more powerful Rolls Royce Conway engines was developed in 1959. Thirty-four were produced in total, of which several were later converted for reconnaissance and aerial refuelling purposes. Two RAF squadrons formed on the B.2 after it entered service in 1962, but it was soon succeeded by the B.2R, a conversion which allowed 'Blue Steel' nuclear missiles to be carried in addition to free-fall nuclear payloads. Following the introduction of submarine-launched Polaris missiles in 1969, the Victor was gradually relieved of its role as a nuclear deterrent but it remained a valuable asset to the RAF as a tanker up to its retirement in 1993.