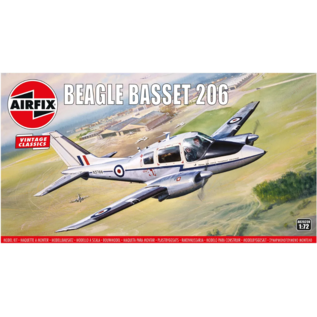 The handsome Beagle B.206 Basset was a twin-engined light executive transport and military communications aircraft built by the Beagle Aircraft Company at their Shoreham base and held the potential of being a huge global success, but for a number of reasons, would only be built in relatively small numbers. With the aircraft's wide cabin capturing the attention of the RAF, the Basset entered a fly-off competition with the de Havilland Devon in March 1963 to assess which aircraft would be the successor to the venerable Avro Anson, with the Basset emerging victorious and attracting an initial order for 20 aircraft. In RAF service, the Beagle B.206R was designated Basset CC.1, with the first aircraft reaching RAF Communications Squadrons during May 1965.

Powered by two Rolls-Royce/Continental GIO-470 engines, these six cylinder, horizontally opposed powerplants gave the aircraft a maximum speed of around 220mph and a range of 1,650 miles, with the spacious cabin of the Basset able to carry up to eight people in some comfort. One of the interesting duties intended for the Basset in RAF service was the transportation of fully equipped V-Bomber crews between dispersal airfields around the UK. The Basset would also be used by the Queen's Flight and by both the Empire Test Pilots School and A&AEE at Boscombe Down.