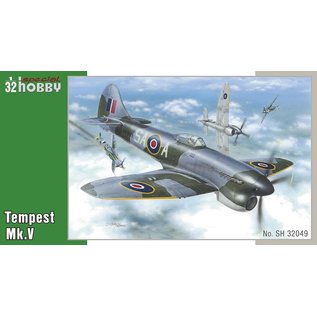 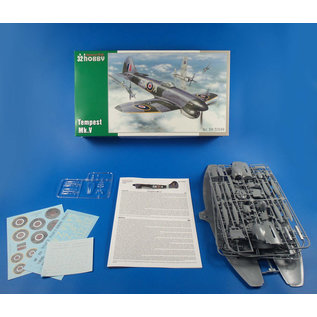 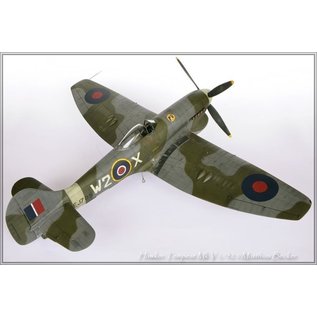 During WW2 the opposing sides were constantly competing against each other to keep abreast of the latest technological developments and as a result this led to ever more powerful and effective warplanes. In 1941 the new Fw 190 fighter began to enter service and the British hastily developed the Spitfire Mk.V into the Mk.IX with a better engine, and also introduced a new type called the Hawker Typhoon Mk.I into the service too. The introduction of the Typhoon fighter into service was rather complicated and as it also became clear soon that the Typhoon would not fit the requirements for a standard day fighter aircraft, the Hawker´s chief designer Sydney Camm began to design an improved version which, because of the number of changes received eventually a new name, the Tempest. And became one of the best fighting machines of WW2.

The 1/32 scale model of this iconic fighter plane was first issued in so called Hi-tech boxing, which is becoming almost sold out these days and now we would like to offer the modeller a basic version of the kit, which means it doesn´t contain the extra bonuses of resin (PUR) and photo-etched parts. The plastic parts come via as many as eight sprues of grey styrene and one clear plastic sprue and the surface throughout benefits from neatly engraved panel lines and rivet details. During the build, the modeller is guided by a highly detailed A4-size full colour instruction booklet. The decal sheets (there are three of them) and the camouflage option schemes offer in total four different machines. The Camouflage A represents NV969 / SA-A machine flown by Sqn.Ldr. Warren „Smokey“ Schrader, DFC and Bar (out of his total 12 kills he achieved 9 and ½ in the Tempest). Camo B offers JN862/JF-Z adorned with invasion ID stripes and it was a usual mount of F/Lt. Remy van Lierde, DFC and Bar, a Belgian in RAF service with 44 victories over V-1 missiles. The third camouflage option is EJ705/W2-X with a smart kangaroo artwork on the fuselage side and was flown by Australian Plt. Off. F.A. Lang . The camouflage scheme option D brings the modeller SN165/ZD-V machine, in which cockpit its pilot Sqn. Ldr. Emanuel Barnett Lyons, DFC experienced a rather arduous story with a fortunate ending. The decal sheets cater also for a complete set of stencils, including also items for the cockpit and the external fuel tanks.