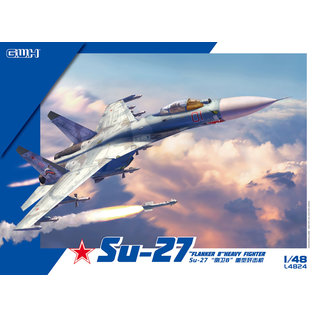 Great Wall Hobby (through Pit-Road) brings us their kit of the single-seat Su-27 Flanker B! The main wing front edge slats, flaps, and horizontal stabilizer can all be built lowered or raised; the nose radome can be built opened or closed. The air brake can also be built opened or closed. Photo-etched parts such as the head-up display are included, as are decals for six versions (one each for the Russian Naval Aviation Corps, Russian Air Force, Soviet Air Force, Ukrainian Air Force, and two for the Chinese Air Force).

Unassembled and unpainted plastic kit. To complete this kit you need to buy paints, glue for plastic models, thinner, brushes, which are not included.