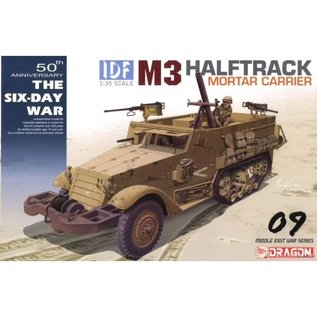 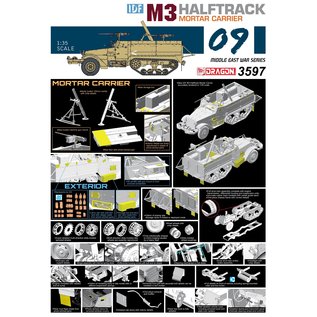 The decisive Six-Day War fought between Israel and its neighbors marks its 50th anniversary this year. Dragon has been commemorating the 1967 conflict with a series of 1/35 scale kits of M3 halftrack variants used by the Israel Defense Forces (IDF) at that time. The M3 in IDF service was an important vehicle for mechanized infantry, and some were equipped with either an 81mm or 120mm mortar to give units mobile fire support. Dragon’s newest kit depicts such an M3 with a Soltam M-65 120mm mortar installed in the rear. This 1/35 scale kit inherits the excellent foundational features of Dragon’s model of a WWII American M3 halftrack, but with all the suitable modifications needed to represent an Israeli M3 in the Six-Day War period. Of course, the correct 120mm mortar is featured in precise detail, as well as a brand new floor plate for the fighting compartment. Also new are stowage bins inside the rear of the vehicle. To help create a realistic-looking halftrack, Dragon provides a collection of DS backpacks and kit to hang off the sides of the vehicle. Because such halftracks were used long before and after the 1967 conflict, this new kit offers enormous modeling versatility for fans of Israeli armor.