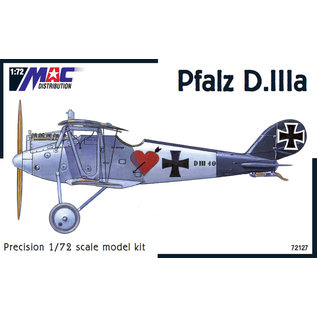 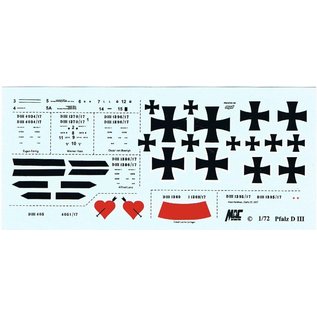 The major difference between the D III and D IIIa models is mainly the positioning of weaponry, with the two fixed synchronized Spandau LMG 08/15 machine guns now (in D IIIa model) instaled on the upper part of the body, level with pilot’s sight, while in the D III model the machine guns were installed inside the body itself. In addition, the Pfalz D IIIa model also had larger tailplanes and the lower wings of different shape. The engine, which remained the same, was in-line, water-cooled, 6- cylinder Mercedes D IIIa engine generating 160-180 hp.

Prototype of Pfalz D IIIa fighter plane first appeared probably in the beginning of June 1917, with models from the serial production arriving on the Western Front in the autumn of the same year. Although model Pfalz DIIIa was probably not as facile as the Fokker Dr. I triplane, it was - just as the earlier Pfalz D III model, highly valued by the German pilots for its solid and robust construction. German pilots were unafraid to execute high-speed nose-dives withouth any danger of the wings disintegrating, as was the case of especially the Albatros planes. The Pfalz D IIIa plane were used parti - cularly for destroying the enemy reconnaissance balloons. Many of the Germany fighter plane units, including the famous squadron such as Jagdstaffel 4 and Jagdstaffel 10, were supplied, either fully or partly, with the Pfalz D IIIa fighter palnes. They were also flown by many famous and lesser-known Germany flying aces including, for example, Rudolf Berthold, Rudolf Stark, Hans Böning and others. The production of the Pfalz D IIIa models came to an end in May 1918, and it appears that, according to the recently restored list of serial production numbers, between 750- 775 of theseplanes were made. A certain number of planes from the last production series was also delivered to Turkey.

From the very beginning the Pfalz D IIIa models were used on the Western Front in combat as well as behind the lines for training the pilots. In general, Pfalz D IIIa fighter planes were of major importance to Germany Air Force.

Nearly all Pfalz D.III planes were painted in the factory with a silver-grey paint, called Silbergrau, with the paint being applied to all plane’s surfaces, including metal sheeting of fuselage, struts, etc. This silver-grey paint was typical for Pfalz D.III planes but it is quite likely that it was a copy of the French practice or, more precisely, the idea, as based on the study of the captured Nieuport planes.

Photographs also show that a certain and, from all indications, a small number of Pfalz D.III planes were already in the factory given a camouflaging treatment which consisted of irregular areas of, apparently, two different colours on the top and the sides. It is only a guess that the two camouflaging colours were green and purple. The underside of the plane was either camouflaged in light blue paint or, as is more likely, it was left painted silver-grey.

Majority of Pfalz D.IIIa planes left the factory with all their surfaces painted silver-grey or, the canvas-covered areas were covered with fabric printed with lozenge-shape camouflaging. It is, of course, quite likely that some of the planes, which had the fabric printed with lozenge-shape camouflaging, had the underside of wings and tailplanes and elevators painted either light blue or silver-grey. Later, the so-called straight sided crosses with white edging were used as markings, also displayed in eight positions. From March 1918 the combat and training units used a whole range of various types of straight sided crosses as markings on both the D.III and D.IIIa models, as was actually the case with most German planes of that time. Sometimes the earlier and later types of crosses were used at the same time, which was the result of badly formulated, unequivocal and, often, misunderstood orders regarding changes of the national markings. The planes were in the factory also given various other stencilling using black paint. On both sides of the plane in the front there was painted a black line, so-called ‘datum line;, marking the axis of the plane. This "datum line" extended front metal panel roughly to the level where the front undercarriage supports were.

As far as the painting and colouring of both Pfalz D.III and D.IIIa planes it is also necessary to keep in mind the large number of anomalies. After their delivery to operational units the factory-painted planes were also given markings of either the unit or the pilot or, often, both, which quite often changed appearance of the planes quite considerably.