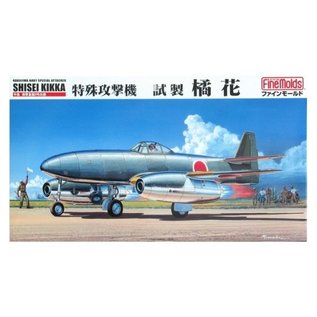 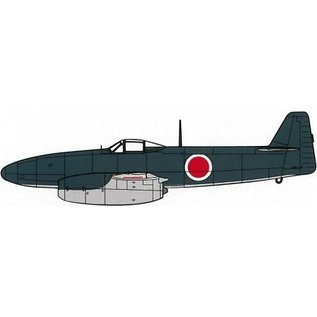 Kikka (Orange flower) was based on the limited documentation of Messerschmitt Me 262 available in Japan in late 1944. The Imperial Japanese Navy decided to issue a request to build a jet bomber capable of carrying a 500kg bomb on a 205km distance the maximum speed of 696 km/h and landing speed of 148 km/h. Those metrics were higher than the 17-shi requirements but still far below the design capabilities of Me 262.

The design was lead by Kazuo Ohno and Kenichi Matsumura, the final airplane was smaller than the Messerschmitt base and had foldable wings. It’s landing gear was a mixture of A6M and P1Y setup and the wing setup was redesigned versus the German construction. It was supposed to be powered by Japanese made engines but their design immaturity forced the design team to adopt a direct copy of BMW 003 engines for Kikka. The first prototype flew on the 7 August 1945 followed by a second test flight on the 11th of August. During the second flight, the airplane suffered damage which was not repaired. Even though the second prototype was finished and additional 25 airplanes were on the production line of the Nakajima factory test flight were not continued until the end of World War II.