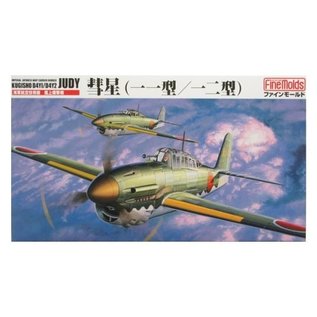 Designed by First Naval Air Technical Arsenal in Yokosuka to replace Aichi D3A, Suisei reached mass production phase in July 1942. Version D4Y1 was powered by Aichi version of Daimler-Benz DB 601 engine ‘Atsuta 12’ (895kW) an upgraded version ‘Atsuta 32’ (1044 kW) was fitted in D4Y2. Thanks to it’s slim fuselage and light weight the airplane was much faster than any other dive bomber and had adequate maneuverability. However, it’s light weight came at the cost of not fitting self-sealing fuel tanks and armor which made it vulnerable to enemy fire. A total of 2000 Suisei’s were made during World War II.