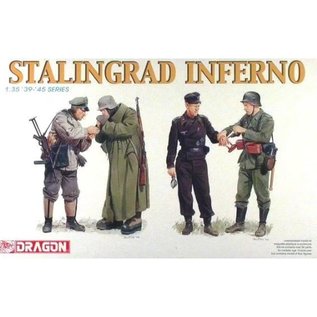 The Russian winter was a ghastly environment in which to fight, but both German and Russian troops had to contend with the bitterly cold and biting conditions there in WWII. Dragon has brought together a collection of five figure sets that portray German soldiers fighting in the depths of winter on the deadly Eastern Front. Earlier, Dragon recently released a collection of 1/35 scale figures representing soldiers fighting in the hot, sandy deserts of North Africa. This time around, these well-wrapped soldiers provide a strong contrast to those desert warriors.

There are five Dragon 1/35 scale figure sets in this assortment. Most of these sets have not been available for quite some time, so this is the perfect opportunity for modelers to restock their shelves or to make a vignette straight from the box. A range of weapons and uniform types is included – whether white snowsuits or thick sheepskin jackets, for example – but what each figure has in common is that they’re suitably attired for the Russian winter. All figures are sharply molded and authentically sculpted, and they represent the best of Dragon’s quality. This fine collection of winter warriors makes a nice addition to the previous desert soldier assortment.